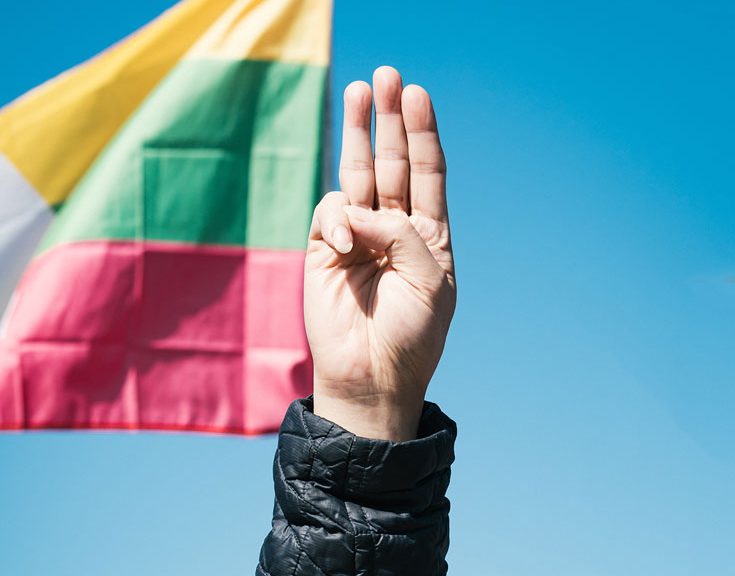 Khin Mai Aung shares how Buddhists and other allies can support Myanmar’s activists and Civil Disobedience Movement in the aftermath of the February 2021 military coup.

As Myanmar spiraled into chaos after a February 2021 military coup, the international Buddhist flock and other friends of the country who had been heartened by its transition to semi-democracy watched with mounting concern. To be sure, Myanmar, formerly known as Burma, has been backsliding on civil liberties for a few years – with an exodus of over 700,000 persecuted Rohingya Muslims, an alarming rise in religious nationalism, surging discrimination against ethnic and religious minorities, and targeting of political opponents with arrest.

But in the months since the coup, a widespread and rapid erosion of order and security has engulfed Myanmar, with scores of peaceful protestors gunned down, internet shutdowns, large scale targeting of journalists and media institutions, and a looming threat of all out civil war. The people of Myanmar – Buddhists and religious minorities, Bamar as well as ethnic minorities – collectively face a singular threat, the barbaric junta which has ruthlessly taken power despite a resounding loss in last year’s elections.

As international observers reflect on how to support Myanmar’s Civil Disobedience Movement of boycotting government workers and brave protesters taking to the streets, Burmese community groups within the country’s diaspora and international Buddhist organizations have sprung into action. Partnering with vetted intermediaries in Thailand and Myanmar, these groups are dispersing aid in grants and in kind support on the ground within Myanmar.

The Clear View Project, a Buddhist nonprofit that funds social change and relief efforts from a socially engaged Buddhist perspective, is one such organization. In partnership with the International Network of Engaged Buddhists (INEB), Clear View has conducted fundraising for relief projects, including for telecommunications equipment like SIM cards, personal protective equipment for protestors, medical and funeral expenses, and financial support for government workers boycotting the junta.

Clear View and INEB are also launching a new initiative specifically to support monks and nuns in the Civil Disobedience Movement. While these religious figures have not been categorically targeted, this initiative is directed at assisting those who participated in protests, some of whom are in hiding to avoid arrest. Clearview is also working with partners to organize a “Burma Spring” virtual film festival benefit in June 2021 to raise additional funds to support Myanmar activists. As of late April, Clear View and INEB had raised about $24,000 for their collective efforts, and donors can designate their preference for use of funds.

Hozan Alan Senauke of the Clear View Project recommends that American allies can also make a difference by lobbying the United States “to apply pressure on Thailand [to advocate] for humanitarian treatment of displaced people, for opening its borders, and for not repatriating them – that’s a place that via the State Department we have some agency.”

Clear View’s sister program, the Buddhist Humanitarian Project, provides targeted support to Rohingya refugees. Over the past few years, it has raised over $50,000 to support Rohingya in refugee camps and local communities. It has continued these efforts since the coup, especially as fires ravaged several camps in Bangladesh this year. Such support is critical as Rohingya refugees remain in squalid camps and are at risk of COVID without sufficient personal protective equipment, as the world’s attention has turned to the coup and conditions inside Myanmar. One bright point, Hozan Senauke points out, is that after the coup “the whole nation of Myanmar is a tuning itself into the Rohingya issue [and broader concerns about] the government and military’s brutal discrimination toward various ethnic groups.”

Buddhist temples and secular community organizations affiliated with the Myanmar diaspora and its allies have also stepped up efforts to support the people of Myanmar. Mutual Aid Myanmar is a non-partisan volunteer organization consisting of activists and academics that is raising money to disperse humanitarian aid in Myanmar via trusted civil society groups. Like Clear View and INEB, their support covers funds for food, healthcare and shelter for now unemployed Myanmar government workers in the general strike against the junta. Mutual Aid Myanmar’s vetted local partners remain anonymous for their protection. Mutual Aid Myanmar has raised and distributed an impressive $275,000 for these purposes since the coup.

Other community-based efforts have focused on non-material supports, community education, and relationship building. The Baydar Collective is a network of youth activists from the Myanmar diaspora based in North America, named after the baydar (hyacinth) flower, which is associated with resilience and resistance. According to Ashley “Aye Aye” Dun, a graduate student at Brown University and a member of Baydar’s steering committee, Baydar’s goal is to “unite people in the Myanmar diaspora to talk about the ways that ongoing events in Myanmar affect our diasporic communities, because it directly affects us too through our families, relatives, and friends in the country struggling in the resistance.”

Baydar is hosting a virtual reading series focused on topics ranging from analyzing implications of the Myanmar opposition’s new constitution (the Federal Democracy Charter), discussing ethnic and religious divides in Myanmar and its diaspora, and examining parallels between anti-Chinese sentiment in Myanmar with the recent surge of anti-Asian violence in the United States. To celebrate Asian Pacific American heritage month in May, Baydar is launching a virtual art circle where members of the Myanmar diaspora will come together to discuss current events, socialize, and participate in drawing and art activities. Baydar has also supported activists in Myanmar though social media campaigns and public information dispersal, and plans to build coalitions with other Asian American activists and communities of color in the United States.

Aye Aye Dun reports that one critical way for Buddhists abroad and other supporters to support Myanmar’s resistance is to attend local anti-military protests, which Burmese Buddhist monks often attend. She believes “these events are a valuable opportunity for interfaith unity.” She also pointed to strategic boycott efforts – for example recent efforts to target Chevron, an American corporate investor in Myanmar which has actively lobbied against more aggressive sanctions on the country’s military.

More abstractly, and directed at the longer term, Aye Aye Dun suggests that allies can also focus on simply educating themselves more generally about the heterogeneity of resistance in Myanmar and its diaspora. In addition to providing direct support, allies can gain a more nuanced understanding of Myanmar’s ethnic and religious diversity and the country’s historical and sociopolitical context. They can also learn about how supporters of democracy within and outside Myanmar deploy their resistance in myriad ways, taking into account safety concerns within the country for themselves or relatives left behind. “A more sustained relationship to support Myanmar’s prodemocracy efforts requires us to always keep learning” about the situation and dynamics on the ground, says Aye Aye Dun, and “this is something we are trying to do at Baydar.”

While the situation in Myanmar is dire and likely to be protracted, these fundraising, support, and education efforts can foster a modicum of hope regarding the spirit of the people of Myanmar and its diaspora, and the diligent efforts of its diverse allies working to lift up and champion those on the frontlines of Myanmar’s Civil Disobedience Movement.

More information about the efforts described above – which are not affiliated with Lion’s Roar – is listed below in alphabetical order.

Baydar Collective is a group of young people in North America from the Myanmar diaspora that conducts community education on the heterogeneity of anti-military resistance (and how it is shaped by intersecting differences in ethnicity, religion, class, gender, and sexuality), promotes the work of vetted United States nonprofits to support the people of Myanmar, highlights issues affecting the diaspora of Myanmar, and builds affinities and coalitions with other Asian American activists and activists of color.

Buddhist Humanitarian Project provides aid and support for Rohingya communities in Myanmar, Bangladesh and India. It is an initiative organized by the Clearview Project, in order to call upon the global Buddhist community to take a stand against violence inflicted upon the Rohingya and to support Rohingya refugees.

Clear View Project provides Buddhist-based resources for relief and social change, promotes dialogue on issues of socially engaged Buddhism, and supports communities in need, both internationally and within the United States. A successor of the Buddhist Peace Fellowship’s Burma Project, the Clear View Project has worked in Myanmar for many years including supporting activism leading up to the 2007 Saffron Revolution and throughout the country’s political and economic reforms since 2011, supporting political reforms and community development.

International Network of Engaged Buddhists is an autonomous organization under the Bangkok-based Sathirakoses-Nagapradeepa Foundation, and includes both organizational and individual members from more than 25 countries across Asia, Europe, North America and Australia. From this diversity, INEB promotes an understanding of socially engaged Buddhism which integrates the practice of Buddhism with social action for a healthy, just, and peaceful world.

Mutual Aid Myanmar provides humanitarian support via resources to unemployed general strike workers in Myanmar in the form of food, healthcare and shelter. Mutual Aid Myanmar and verified partner organizations provide this aid in kind and via small cash stipends. Partner organizations are vetted by their Board of Directors and are part of local civil society networks.