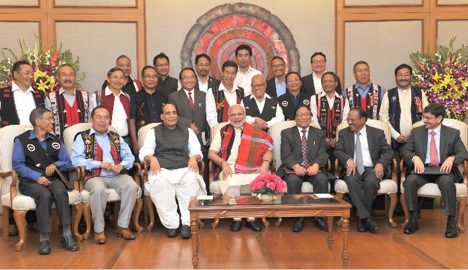 August 24, 2015 proved to be a historic day for Nagaland as this was the day when a peace accord was signed between the Government of India and the rebel Naga group NSCN-IM. The issue of Naga insurgency has been a grave danger and a big cause of worry for both the residents of northeastern states and the Indian government. The issue of Nagaland goes as a back as the year 1881 when Naga Hills became a part of British India. The Naga leaders have wanted a separate and independent Naga state. However, with time the demands of most of the rebel factions have somewhat changed. Now they are not demanding Independence from India but they want all Naga-inhabited contiguous areas to be combined into one state which they call ‘Greater Nagalim’.

The current area of Nagaland 16,527 sq. km but the map of Greater Nagalim as claimed by the Naga insurgent parties has about 1,20,000 sq. km of land. They are claiming several districts from the Indian states of Assam, Arunachal and Manipur and along with that they are also want a large tract of Myanmar to be a part of the Naga state. This is one of the main reasons why other northeastern states especially Assam, Arunachal and Manipur have been wary of peace settlements with the Naga rebels as they fear it will affect their territories. However, after the current peace deal Indian Prime Minister Mr. Narendra Modi has stated that no change in current boundaries has been promised. He further stated that this deal will benefit entire northeast. Mr. Modi further said that India will develop only if the northeast develops. The peace and stability brought in the region will pave the way for development and prosperity.