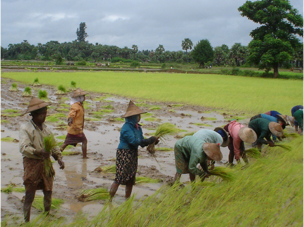 Since the middle of July this year, Myanmar has been experiencing a lot of heavy rains and even flooding. The areas most impacted by this are Sagaing Region, Shan State and Kachin State. In these areas excessive rains and flooding have destroyed more than 24,000 hectares of paddy fields. This seemed like a bad idea for Myanmar’s international trade as rice is one of the country’s main export items. Myanmar’s agriculture ministry issued a statement which said that about 981 hectares of summer paddy, about 14,676 hectares of monsoon paddy, and about 1,240 hectares of seedling fields has already been harmed due to flooding by July 19.

However, a reassuring statement has been issued by Myanmar Rice Federation which states that rice exports may not be affected significantly. A report published by Oryza.com states that Mr. U Ye Min Aung who is the General Secretary of the Myanmar Rice Federation has said that while overall yields might be somewhat negatively impacted but this would not have any impact on exports. He also appealed to the Myanmar Government to implement the new laws that have been framed especially for the protection of the farmers and use them to support the farmers in overcoming their difficulties.