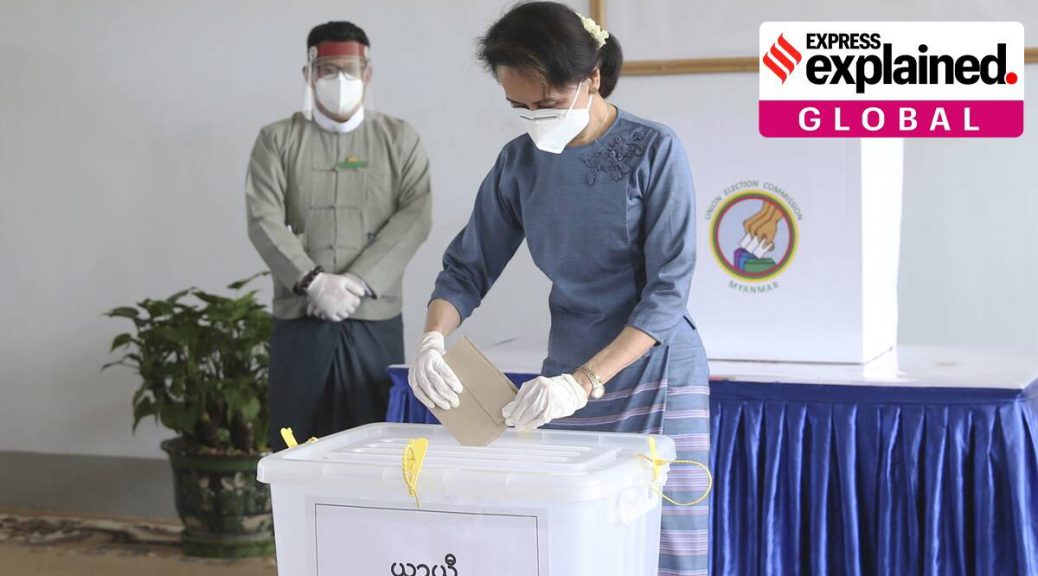 Myanmar votes on Sunday, five years after Aung San Suu Kyi’s landslide win. Against the backdrop of a pandemic, Rohingya crisis, and military assertion, a look at what’s at stake for Suu Kyi and her country

Myanmar will vote on November 8 in an election that is being seen as test of Aung San Suu Kyi’s leadership of the country over the last five years. In the last elections in 2015, the Suu Kyi-led National League for Democracy won a landslide victory.

The elections are for the upper and lower houses of the national Parliament, the House of Nationalities and the House of Representatives respectively, as well as to the assemblies of Myanmar’s seven states and seven regions — a total of 1,171 seats. The President is elected by the bicameral national Parliament. Chief Ministers of the states and regions are appointed by the President.

The elections will be held against the backdrop of the Covid-19 pandemic, the continuing Rohingya crisis, a nationalist Buddhist resurgence, and an assertion by a military that runs the country along with the elected civilian government in a hybrid system.

Rohingya and the vote

As many as 7 to 8 lakh Rohingya fled to Bangladesh when the Army began a crackdown on an alleged terrorist group in 2017 in Rakhine province, home to this Muslim minority group. The Army action was backed by Suu Kyi and her government. The refugees now live in what has described as the “world’s largest refugee camp” at Cox’s Bazar. Bangladesh wants Myanmar to take them back, but Myanmar, which holds that Rohingya are not “indigenous” and calls them Bengali (the word Rohingya is not officially recognised), is unwilling to do so.

In past elections, Rohingya have voted. This time, they will be almost entirely excluded from the election. Many Rohingya candidates were rejected during the filing of nominations. Last month, the Myanmar Election Commission said that for security reasons, elections would not be held in many areas of Rakhine. This means even the 600,000 Rohingya who remain in Myanmar will not be able to vote. Nor will the anti-Suu Kyi Rakhine Buddhists, who allege that political motives are behind the cancellation of the election.

This is Myanmar’s third election under the 2008 military-drafted Constitution, part of its “road map to democracy”. The NLD had boycotted the first election in 2010, when Suu Kyi was still under house arrest. The junta put up proxy candidates through the Union Solidarity and Development Party and won most of the seats. Following Suu Kyi’s release after the election, the junta, under international pressure, eased restrictions on political and civil society activity and permitted independent media. Over the next five years, investments poured in. NLD’s participation in the 2012 by-elections gave legitimacy to the junta’s reforms. The first credible elections in 2015 were swept by Suu Kyi, then a worldwide icon of democracy.

This time, the NLD carries the burden of incumbency. Suu Kyi had come in with the promise to complete the transition to democracy by reforming the Constitution rammed in by the junta, with near-irreversible write-ins cementing the Army’s role in governing the country — the military gets 25% representation in both Houses of Parliament, and in all the state/regional assemblies, through nomination; the USDP continues to act as a military proxy; the military, known as the Tatmadaw, retains portfolios such as Defence and Internal Security; and it can declare an emergency at any time and take over the running of the country.

There was tension in the civilian-military balance earlier this week after the Commander-in-chief of the Army, Senior General Min Aung Hlaing, expressed dissatisfaction with the way the Election Commission was conducting the polls, and in an interview to a local media outlet, left open-ended the question of whether the Army would accept the election results. A government spokesman said the comments violated the Constitution.

Suu Kyi’s party made efforts to push back the military through 2019 but these were stonewalled by the military representatives in Parliament. She is herself a victim of the Constitution – by virtue of having married a foreign national, she is barred from becoming President. She is now known as the State Counsellor, but is accepted by her party as a higher authority than the President. Alongside, her attempts at a peace agreement with over a score armed ethnic groups ranged against the state, have yielded no outcome yet. The last meeting of the Union Peace Conference — 21st Century Panglong (a reference to the Panglong agreement of 1947) — was held in August. The NLD believes a federal arrangement will remain elusive as long as the Army is powerful.

But Suu Kyi has not pushed the military as her Pakistani counterparts have done in the past. She once described generals in the Tatmadaw as “quite sweet”, and defended the Army in person last year at the International Court of Justice at The Hague against allegations of rape, arson and mass killing in Rakhine.

A resurgent Buddhist nationalism, both inspired by and inspiring similar sentiments in Sri Lanka, has also been apparent over the last five years. On November 2, a firebrand monk known for communal and racist speeches surrendered to the police who were seeking to arrest him for over a year for statements he made asking the military to overthrow Suu Kyi’s government, and called her objectionable names. In 2015, he had asked people to vote for the military-backed USDP against Suu Kyi.

Yet Suu Kyi remains as popular as she was five years ago and is expected to lead her party to victory again. Her defiance of international censure over the Rohingya exodus, and the calls to take back her Nobel Peace Prize, seem to have only bolstered her status as a national icon among the majority Buddhist Bamar.

It has also pushed Suu Kyi into the waiting arms of China, which has been involved in a slew of infrastructure projects in Myanmar, and has wooed her and the NLD since 2015, separately from its continuing tight relations with the military.

Beijing laid out the red carpet for Suu Kyi when she visited in 2016. In January 2020, President Xi Jinping was a high value guest at Naypidaw, with Myanmar Air Force fighter jets escorting Xi’s plane as it landed in the capital.

In an op-ed in Myanmar’s state-run newspaper, Xi wrote that China would support Myanmar in “safeguarding its legitimate rights and interests and national dignity”. Much like how it was Sri Lanka’s only ally during the country’s post-war dog days, China is now Myanmar’s main ally in a world whose ardour for Suu Kyi has long cooled.

During the visit, no new infrasructure projects were signed but the two sides reaffirmed support for speeding up the “China-Myanmar Economic Corridor”, which includes a high-speed railway between industrial zones within the country with connections to the Chinese border, and an ambitious $1.3-billion deep-sea port at Kyaukphyu in central Rakhine, which will provide Beijing a gateway to the Indian Ocean, as part of its Belt and Road Initiative.

Any push against China in Myanmar now comes from the restive regions where the big infra projects threaten to displace people, as in 2011 in Kachin, where a year after Suu Kyi’s release, protests forced the cancellation of a Chinese 6,000 MW Myistone hydel dam.

“After the election, the trajectory of China-Myanmar relations will not change much no matter what the election result is. China will always be a trusted partner of Myanmar and is set to play a constructive role in Myanmar’s development and peace process,” a columnist wrote in Global Times, a Chinese state-run media outlet.

New Delhi has kept cordial relations with both Suu Kyi and the Myanmar Army. While Buddhism provides a cultural bond, and the Modi government has made common cause with the Myanmar government on the Rohingya issue, India does not have the deep pockets for Chinese-style infrastructure projects. India is working on two key infrastructure projects in Myanmar —a trilateral highway between India-Myanmar and Thailand, and the Kaladan Multi Modal Transit project that aims to connect mainland India to the landlocked Northeastern states through Myanmar. A port at Sittwe and an inland waterway are part of this project.