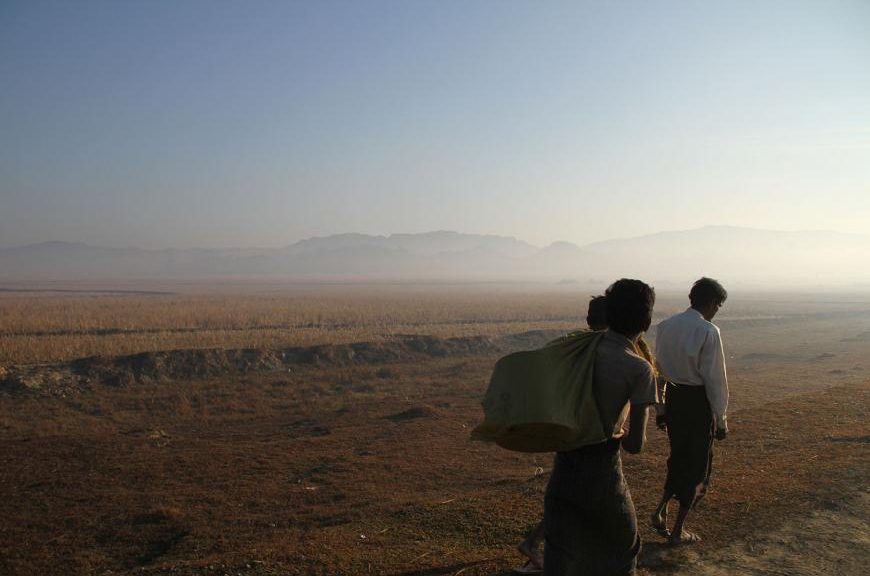 Three people walk along a road close to the surge of fighting between the Arakan Army and Myanmar military in Rakhine State, January 25, 2019. © 2019 Richard Sargent/AFP via Getty Images

Myanmar’s government should immediately lift internet restrictions in Rakhine and Chin States that have put civilians at added risk, Human Rights Watch said today. Government restrictions on the internet have hampered the coordination of aid, collection of accurate information, and monitoring of abuses.

The government has offered new reasons for its ban on mobile internet services, which affects more than a million people amid an armed conflict between government forces and the Arakan Army (AA), an ethnic Rakhine armed group. Myanmar’s Ministry of Foreign Affairs claimed in a statement to the United Nations Human Rights Council on June 30, 2020 and elsewhere on July 8 that the blackout was required, in part to “prevent the AA from exploiting mobile internet technologies to detonate IEDs [improvised explosive devices] and landmines.” Yet command-detonated landmines, such as those attributed to the AA, can be detonated remotely by various simple means, none of which require the internet, Human Rights Watch said.

“The Myanmar government’s latest excuses for its prolonged internet ban in Rakhine and Chin States are baseless and contrary to the reality on the ground,” said Richard Weir, crisis and conflict researcher at Human Rights Watch. “Presenting these overly broad restrictions as necessary to stop landmine use callously deprives people of lifesaving internet access.”

The restrictions are in place in seven townships in Rakhine State and one in Chin State, where the government allows access to 2G networks, which only permit text messages, commonly referred to as SMS, and voice calls.

The government first imposed restrictions on mobile internet communications in June 2019. The restrictions were temporarily lifted in some areas on September 1, but the government reimposed the restrictions on February 3, 2020, within hours after the AA announced that it would release evidence of mass graves of Muslims killed in Rakhine State by government forces during “clearance operations” in August 2017.

The government had cited a “security requirement and public interest” in its order to telecom companies to reimpose the restrictions and later cited an escalation in fighting to continue them. The government also offered other rationales for the internet restrictions, including concerns about posting hate speech, nationalist sentiment, disinformation, and “military secrets” online. Justifications regarding hate speech belie the Myanmar government’s own promotion of nationalist and anti-Rohingya sentiment. In April, Facebook removed 22 pages and accounts tied to the Myanmar police force for anti-Rohingya content.

The Myanmar military previously raised concerns about the AA’s use of “remote-detonated explosive devices,” but had not tied it expressly to the internet restrictions.

Explosive devices can be designed or fabricated to be detonated by the presence, proximity, or contact of a person. Such victim-activated antipersonnel mines are prohibited internationally, regardless of whether assembled in a factory or improvised from locally available materials.

Explosive devices can also be made to detonate remotely. Command-detonated landmines constructed in Myanmar can be detonated by various means, such as long electrical wires to create distance between the device and the trigger, or by radio frequencies used with unsophisticated electronics, like a two-way radio, pager, remote car door opener, or cell phone. A simple timer can also be used to detonate an explosive device.

The Arakan Army has previously admitted to using “landmines” and “mines,” as well as “technology” to “carefully control” their use, but has denied using mobile internet technologies to detonate them remotely. Local media and the Myanmar government have attributed numerous incidents using such explosives to the AA, including while the mobile internet services ban was in effect.

In late 2019, Zee News, an Indian media outlet, said that Indian intelligence agencies believed the AA may be using Bluetooth and Wi-Fi to detonate landmines. Neither technology relies on mobile internet to operate.

Myanmar is not a party to the 1997 Mine Ban Treaty, which comprehensively prohibits antipersonnel mines. According to the annual Landmine Monitor report, Myanmar is the only country whose government forces still use antipersonnel mines, while non-state armed groups in Myanmar and other countries also use them, usually improvised mines.

The mobile internet restrictions in Myanmar, imposed under article 77 of Myanmar’s Telecommunications Law, authorizes the Ministry of Transport and Communications to order the suspension of a telecommunications service or to restrict certain forms of communication during “an emergency” situation. The broadly worded law should be amended to bring it in line with international standards on freedom of expression, Human Rights Watch said.

In maintaining the blanket shutdown, Myanmar is contravening international human rights standards that require internet-based restrictions to be both necessary and proportionate. The UN Human Rights Council has condemned measures by governments to prevent or disrupt online access and information, and called for free speech protections under the Universal Declaration of Human Rights and the International Covenant on Civil and Political Rights.

In a 2015 Joint Declaration on Freedom of Expression and Responses to Conflict Situations, UN and regional organization experts said: “Using communications ‘kill switches’ (i.e. shutting down entire parts of communications systems) can never be justified under human rights law.” UN freedom of expression experts have said that during crises, governments should refrain from blocking the internet and, as a matter of priority, ensure immediate access to the fastest and broadest possible internet service.

The prolonged and disproportionate internet shutdown is also a form of collective punishment against the affected population, since it hinders access to information and communications that are needed for daily life and that are particularly vital during times of conflict and the Covid-19 pandemic.

Fighting between Myanmar government forces and the AA in Myanmar’s Rakhine and Chin States escalated in November 2018. The scale and intensity of the conflict has continued to grow, with reports of nearly 1,000 civilian casualties since the conflict began and hundreds of structures burned during 2020 alone. As of July 6, the UN Office for the Coordination of Humanitarian Affairs (OCHA) said that over 80,000 people were displaced from the fighting throughout Rakhine and Chin States, while local groups told Human Rights Watch that the number of people displaced since 2019 is closer to 200,000. Many civilians, primarily ethnic Rakhine, have been forced to flee multiple times. Sources on the ground alleged that both the Myanmar military and the AA have restricted humanitarian aid from reaching civilians in need.

“The conduct of the Myanmar military and AA continues to imperil civilians,” Weir said. “Myanmar’s government should end its ham-fisted, punitive restrictions on civilians, including its unjustified ban on mobile internet services.”