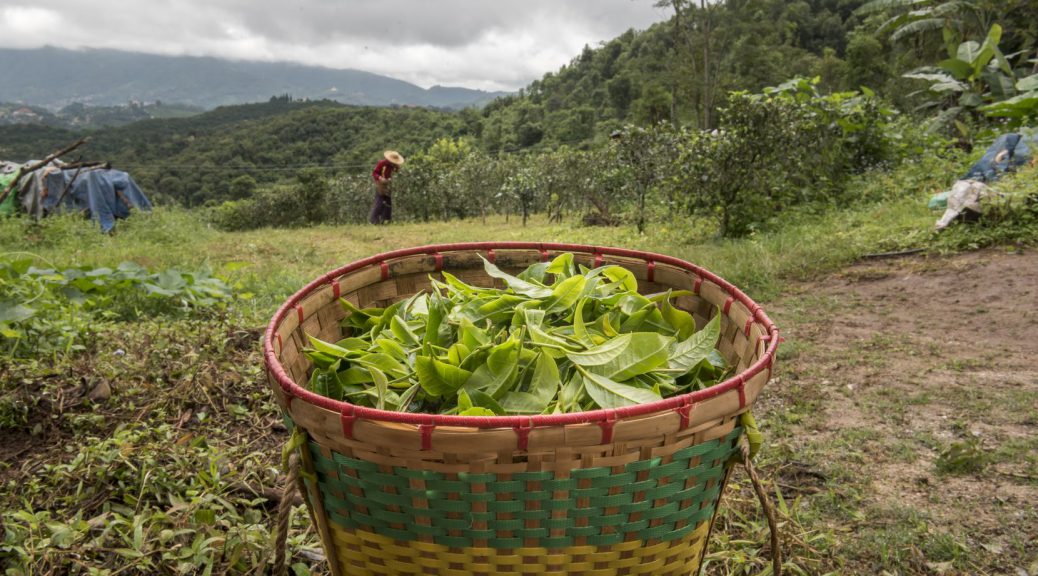 Rakkasan Tea partners with the Mogok Tea estate to promote economic development within a country still engaged in civil conflict.

But they’ve recently branched out to Myanmar, also known as Burma, which is still, technically, in a state of conflict. An ongoing civil war between ethnic groups persists even after an oppressive military dictatorship was dissolved in 2011.

Myanmar is in the cradle of tea country, in Southeast Asia bordering China. But because it’s been isolated from the Western world, so have its teas, and it’s extremely rare to find Burmese tea in the U.S.

Brandon Friedman, who runs Rakkasan Tea with co-founder and former fellow soldier Terrence “TK” Kamauf, says sourcing tea from Myanmar presented a challenge. “There are moral questions,” he says of doing business in a country battling corruption. “It’s something I’ve thought long and hard about.”

But it still fits their mission, he says. “The country is unquestionably in a better place than it was. And we are doing our part to encourage that and prod it along, to allow the Burmese people to connect with the wider world.”

Friedman recently connected with Phyu Thwe, who owns the Mogok Tea estate, a 100-acre oasis of ancient tea trees and newly planted trees untouched by the legacy of destructive gem mining in Myanmar.

Thwe grew up in the small village of Mogok but now lives in London and works as an accountant. The 35-year-old wanted to see the world when she left home at 20, but she quickly became disillusioned with the Western lifestyle and searched for a project with more purpose.

She went back to her childhood, where she remembered walking from village to village with her family, stopping to rest under a tea tree on her way back from the forest.

“This is where I need to begin,” she says. “I kind of realized, if I drop dead tomorrow, everything I study or do, it doesn’t mean anything. But if I create some sort of vehicle that creates something that I can leave behind, it will live on.”

So in 2018, instead of studying to become a tax adviser, Thwe chose to study tea at the UK Tea Academy so that she could learn to farm her family’s land and create a business that would provide economic stability to her home village as well as protect and preserve the environment.

Because tea is not really valued within Myanmar, the ancient tea trees on her family’s land have been virtually untouched. Thwe’s family gave her the land and even told her she was crazy to farm tea, she says. But she’s transformed it into not only a high-quality premium tea operation but also a way to transition the local economy away from the practice of mining and create a model of ethical labor practices and environmental sustainability.

When Thwe was a child, she says, there were green hills everywhere. “Now when I go, there are not many hills left. Everything has been mined. The scenery is gone,” she says.

She started farming 10 acres and employs 12 people whom she pays for the full year, not just during harvest. She has trained them about employee rights, and because there is no health care coverage in Myanmar unless you work for the government, she pays her employees’ doctor bills when they get sick.

“I myself had symptoms of depression, but since this project started, I have felt like I’m no longer depressed,” Thwe says. “Every day I’m working and send money from here [London] to pay them. It’s like if you have a child, but this is not a child, this is for 12 families. That changes a lot over there.”

Thwe and her team are also gentle with the land, as well as the tea leaves. The leaves are hand-picked, and only a little at a time as to not deplete the plant. “Our yield is like a fraction of what others are picking because we let it grow naturally,” she says.

The plants on her property have also been untouched by fertilizer over the years. “So our tea has been grown semiwild and of organic nature,” Thwe says.

Rakkasan Tea Co. has chosen green and black teas from Mogok to add to its lineup. The black tea, which is rare even in Myanmar, is crafted with a “spider leg” twist and has a natural sweetness and fruitiness. The green tea has a toastiness with notes of asparagus.

The tea also has, so far, been unaffected by the coronavirus pandemic due to its rural origins. “The disease hasn’t really spread to these places, so they have more mobility,” Friedman says.

And as we deal with the uncertainty of the pandemic and other stressful current events, tea can be a much-needed salve, whether it’s helping to promote peace abroad or just for taking a calming tea break at home.

The Mandalay Black and Mandalay Green teas are $19.99 each (yields 15-20 cups) at rakkasantea.com.