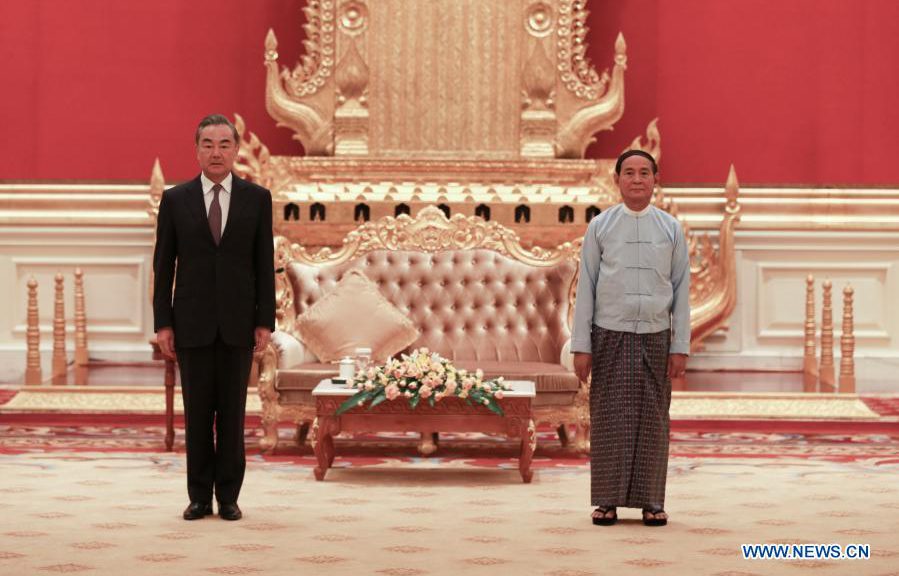 Wang made the remarks during a meeting with Myanmar President U Win Myint.

Noting that he is the first foreign minister to visit Myanmar after the Southeast Asian country’s general elections, Wang said his visit is aimed at demonstrating China’s anticipation and support for the successful formation of Myanmar’s new government as well as Myanmar’s efforts to realize prosperity and long-term stability.

China decided to provide an emergency aid of COVID-19 vaccines to Myanmar to support its fight against the pandemic, and is willing to carry out further vaccine cooperation with Myanmar, said Wang.

Wang believed that the “Paukphaw” (fraternal) friendship between the two countries will be further carried forward and the comprehensive strategic cooperative partnership will be further deepened after the testing of the pandemic.

Wang said China supports Myanmar’s new government in revitalizing its economy, improving people’s well-being, and accelerating industrialization, hoping that the two sides would effectively implement the agreement on the China-Myanmar Economic Corridor with a concerted effort.

Wang said the two countries can extend activities of the China-Myanmar Year of Culture and Tourism to 2021 and promote people-to-people exchanges between the two sides.

China supports the Myanmar government’s efforts in pursuing national reconciliation and will continue to provide assistance within its capacity, he said.

Wang noted that this year Myanmar will assume the roles of the country coordinator of China-ASEAN relations, co-chair of Lancang-Mekong Cooperation and co-chair of consultations on the Code of Conduct in the South China Sea.

Wang said China would like to enhance coordination and cooperation with Myanmar to upgrade China-ASEAN relations, accelerate the development of the Lancang-Mekong economic zone, push for the early implementation of the Regional Comprehensive Economic Partnership.

For his part, President U Win Myint said the Chinese foreign minister was the first to visit Myanmar soon after the new government led by the National League for Democracy was formed in 2016 and took the lead to visit Myanmar again this time during the pandemic, showing China attaches great importance to the relations with Myanmar.

He said Myanmar is committed to working with China to jointly build the Myanmar-China community with a shared future sharing weal and woe, expressing appreciation to China for its support in combating the pandemic and pushing forward the national reconciliation in Myanmar.

The president said Myanmar firmly adheres to the one-China principle and will continue to support China’s position on issues related to Taiwan, Tibet and Xinjiang, adding that Myanmar is willing to play an active role in advancing China-ASEAN relations and Lancang-Mekong Cooperation.