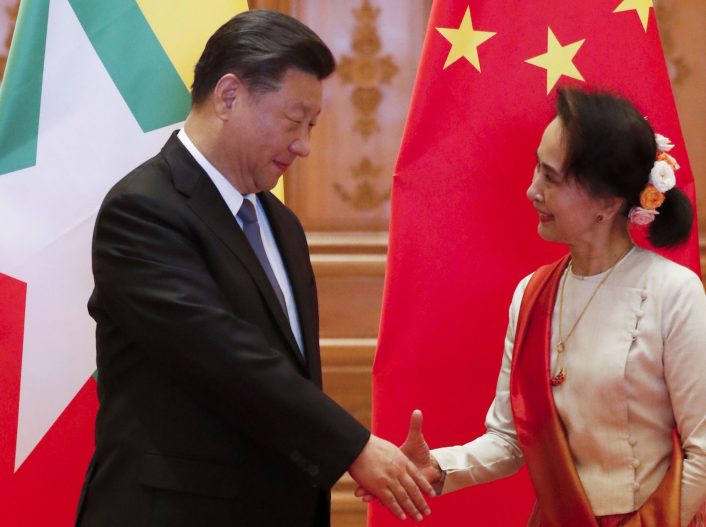 CHIANG MAI – Elections are scheduled for November in Myanmar, and there is no indication so far that the polls will be postponed due to the Covid-19 crisis. Neither is there much doubt about the outcome.

Most political observers believe that State Counsellor Aung San Suu Kyi’s National League for Democracy (NLD) will win again, though not in the same landslide fashion as in 2015 as recent by-elections show she and her party have lost significant support in ethnic areas.

But the bigger electoral question is how her party’s delicate relationship with the autonomous military will play out and in that context how her government’s ties to its powerful northern neighbor China will be portrayed and potentially politicized on the campaign trail.

An entirely new paradigm has emerged in Myanmar, one where Suu Kyi is now seen as a trusted ally of Beijing and the military as a nationalistic bulwark against China’s strong advances. That’s a significant reversal, one that could have implications for stability in the lead-up to polls.

When Suu Kyi was under house arrest during military rule or active in non-parliamentary politics, China viewed the long-time pro-democracy icon with suspicion. That was at least in part because her late British husband, a Tibetologist, maintained ties with many Tibetans in exile.

The military, on the other hand, was closely allied with China and depended on friendly relations with Beijing for arms supplies and diplomatic support at the United Nations, particularly when Western nations sought to refer its harsh political repression to the Security Council for possible sanctions.

Fast forward to the present and those tables have turned. Suu Kyi has become China’s go-to politician for projects and schemes, while the military, though not openly critical of Beijing, has sought to keep a distance from its advances.

The flipped script has been driven by geopolitics. The Rohingya refugee crisis, and Suu Kyi’s refusal to condemn the carnage the military unleashed in Rakhine state in 2017, have dramatically turned her from being the darling of the West into an international pariah.

She has been stripped of one human rights award after another, many of which she earned during her long non-violent struggle for democracy against abusive military rule.

As such, Western aid can no longer be taken for granted in Myanmar, with most grants conditional on improvements in or respect for human rights. But economic development is crucial for Suu Kyi to maintain her popularity ahead of this year’s election.

That has pushed her ever closer to China and its no-strings-attached aid and assistance. Indeed, in November 2017, just months after hundreds of thousands of Rohingya refugees streamed across the border into Bangladesh, Suu Kyi was given red carpet treatment in Beijing.

In January this year, Xi Jinping became the first sitting Chinese president to visit Myanmar since Jiang Zemin toured the country in December 2001. Xi arrived in Myanmar with 33 bilateral agreements that if implemented will bind Myanmar ever closer to China.

Those include high-speed rail and deep-sea projects and strengthening of the so-called China Myanmar Economic Corridor (CMEC), which aims to give China direct access to the Indian Ocean. The agreements were crucial parts of China’s ambitious Belt and Road Initiative (BRI), which Myanmar joined as a founding member in 2015.

Senior General Min Aung Hlaing, the Myanmar military’s commander, may have visited Beijing a week before Suu Kyi arrived in 2017, a visit at which Xi described Chinese-Myanmar military relations as “the best ever”, but both knew in reality that wasn’t and still isn’t the case.

Myanmar’s military sees itself as the chief defender of national sovereignty and, according to security analysts in Yangon, the generals are apprehensive about China’s rapid economic and infrastructure expansion in the country.

That apprehension is compounded by insurgencies in ethnic Palaung-inhabited areas in northern Shan state and Rakhine state in the west, where the Arakan Army (AA) has grown from a handful of guerrillas to a formidable fighting force in the span of less than a decade.

It is hardly any secret that both the Palaung Ta’ang National Liberation Army (TNLA) and AA are equipped with Chinese-made weapons obtained through the United Wa State Army, Myanmar’s strongest and best-armed ethnic army which has a long-time close relationship with China.

In November last year, the military expressed its displeasure that the country’s most active insurgents carry mainly Chinese arms. A huge cache of Chinese-made weapons, which the military claimed it had captured from the TNLA, was put on public display and shown on national television.

Among the haul was automatic assault rifles, recoilless rifles, boxes with bullets, RPGs and even a FN-6 shoulder-fired MANPAD, or man-portable air-defense system gun. Pictures displayed on social media have recently shown an AA commander carrying an FN-6, a gun which has been seen previously in a civil war situation only in Syria and Iraq.

China’s double-game in Myanmar, where it serves as both an armed conflict mediator and supplier of arms to insurgents, is a long-worn carrot and a stick approach to get what it wants, namely the CMEC and access to Myanmar’s rich natural resources including copper, gold, jade, amber and rare earth metals.

Myanmar is the only immediate neighbor through which China can bypass the congested Malacca Strait and the contested waters of the South China Sea, putting the development the deep-sea port at Kyaukphyu on the Bay of Bengal high on Beijing’s BRI agenda.

But China has not yet secured all it wants in Myanmar. A massive hydro-electric power project at Myitsone in the far north of the country was suspended in 2011 by then-president Thein Sein, a former army general. As much as 90% of the power produced was scheduled for delivery to China.

Moreover, the initial $7.5 billion price tag for the Kyaukphyu port project has been winnowed down to $1.3 billion amid concerns of a possible Chinese debt trap.

Whether the military rolled back these two big-ticket projects is not immediately clear. Privately, however, sources close to the military’s leadership believe Suu Kyi is moving the country too close to China, without taking into consideration what Chinese largesse might mean for national sovereignty.

The Covid-19 crisis may increase that concern as Western investment has been largely shelved and China alone seems to be willing to assist and invest even more in Myanmar during the pandemic.

On May 20, Xi spoke by phone with Myanmar President Win Myint to highlight China’s donation of medical supplies and two medical teams to Myanmar to help fight the disease. China’s ambassador to Myanmar Chen Hai emphasized in a recent interview with the Myanmar Times that Beijing remains committed to investing in the country despite Covid-19.

But that investment will likely accrue more political benefit to Suu Kyi and her NLD than the military’s aligned United Solidarity and Development Party (USDP) in an election year, raising the prospect that Beijing’s deepening influence could for the first time become a political issue on the campaign trail.