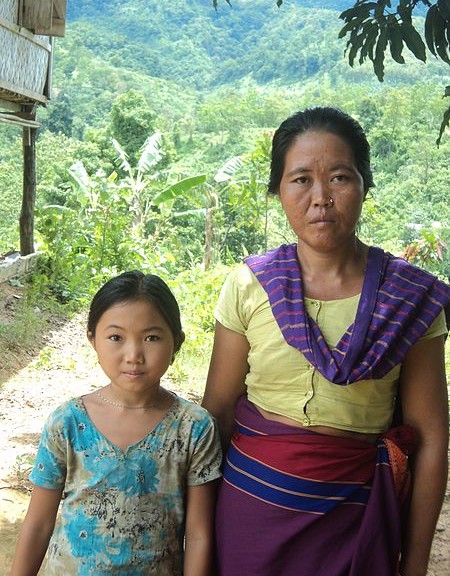 Chakma People are an ethnic minority group that is spread across India, Bangladesh and Myanmar. A large concentration of the group resides in the Chittagong Hill Tracts of Bangladesh (erstwhile East Pakistan).  Chakmas are Tibeto- Burman, have their own culture, language and profess Theravada Buddhism – a combination of Hinduism and traditional religions.

Chakmas came to India from Bangladesh and since the tribe practiced Buddhism mainly, they identified themselves with the Hindus of India. They are said to have faced religious persecution in East Pakistan and therefore, due to communal violence and displacement, entered India through Lushai Hills of Assam (Today’s Mizoram). Chakma villages have a large number of Buddhist temples and they look up to Monks, who preside at important events and functions in the lives of the tribe. Foreign and local missionaries have been trying to convert Chakmas into Christians, thereby, creating resentment in them.

The Chakma people of India have been fighting for citizenship since 1960. At the time of migrating to India, they officially crossed the border under the leadership of Pt. Jawaharlal Nehru and so they are legitimate residents in the country. However, due to illiteracy and lack of understanding, many of    them have lost the legal document. Apart from denial of legal citizenship, Chakmas also face other forms of discrimination. They are abused and exploited and denied educational and employment opportunities and are often accused by other regions of being involved in criminal activities. At birth, children are not granted their birth certificate and although offered, in reality they are held back.

In a joint statement issued by Government of India and Bangladesh, in 1972, the Chakmas were to be conferred citizenship but the State of Arunachal Pradesh opposed this and continues to do so. The Supreme Court in September 2015, directed the central and Arunachal Pradesh governments to confer the citizenship rights on the “eligible” Chakmas. Many student groups and the Government of Arunachal Pradesh has opposed this decision and has filed a petition to the Supreme Court to re-examine the ruling objecting to the permanent settlement of Chakma in the state and their exclusion from the provisions of the Inner Line Permit. The Chakma people of Myanmar are the least known people in the world and live in northern Rakhine State of Burma and adjacent southern areas of Chin State.  They are known in Myanmar as Daingnet people. Chakma Day is celebrated in Myanmar to revive the tribe’s lost culture, history, language and script.  Chakmas speak languages influenced by neighboring Chittagonian, a language close to Assamese. Chakmas are people with their own culture, traditions, folklore and literature. The staple diet of the Chakma people is rice, millets and bamboo shoot, that they call, “Bajchuri” and shrimp paste. Their cooking techniques include slow cooking vegetables and meat wrapped in banana leaves on low fire.

Chakma women wear traditional outfits that are hand woven and colorful with intricate designs. A two piece attire with a skirt at the bottom and a wrapped cloth above. Chakma people are mainly farmers by profession and are extremely protective of their culture and land. Although with time, in order to protect themselves against encroachment and to secure their rights to participate in any governmental decision making processes that affect them, the Chakmas have been coming out, speaking for their rights and actively pursuing their fight for attaining citizenship. Within the Chakma community, the Community has no caste distinction and maintain communal harmony amongst their people. There is no discrimination internally on grounds of behavior, acceptance or living together.