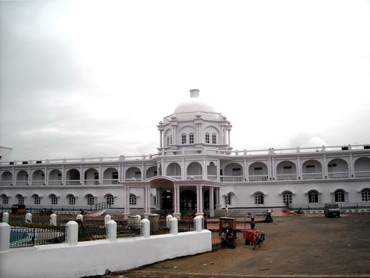 The Tripura Government has plans to extend the Indo-Bangla railway project and it would need to acquire a huge stretch of land for it. Acquiring that much land is a very expensive affair and the state Government doesn’t have enough funds to do it on its own. Central Government has come forward to help Tripura in this regards and it has promised to provide 60 percent of the amount required to complete this process. State Government is waiting to receive the funds from centre so that it can begin the land acquisition process. The initial cost estimate for the complete project was Rs. 302 crore but it has been revised and reduced to Rs. 97 crore now.

The recent decision taken to construct a 3.7 kilometres long flyover is the main reason for this reduction. The fly-over will stretch from Agartala railway station to Charipara including the 1.3 kilometres railway yard which will connect to Gangasagar Railway Station in Bangladesh. The railway line in question will be 15.054 kilometre long and run from Agartala to Akhaura.  The improved connectivity provided this railway line will prove beneficial in various ways. This project will certainly help to strengthen the bond between India and Bangladesh as well as boost trade.

The proposed railway line will enter Bangladesh from a village named Nischintapur which is located at Indo-Bangla border. It will be a broad gauge railway line and its construction work is expected to be completed by 2017. Agartala Railway station received a commercial broad gauge train for the first time ever on February 23, 2016.The plan to connect all North East state capitals by broad gauge line is also in the pipeline and as per Union Minister of State for Railways Mr. Manoj Sinha this will be done before we enter the year 2020.