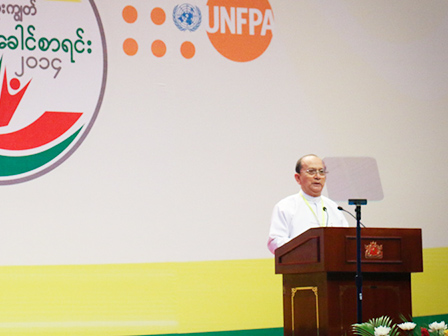 A comprehensive profile of Myanmar’s 51.5 million people and how they live is available for the first time in three decades.

“Planners at all levels can use these to identify gaps and pinpoint needs for infrastructure and social services,” the United Nations Population Fund (UNFPA) said in a release over the weekend.

UN special adviser for Myanmar Vijay Nambiar hailed the census as a “monumental achievement” that will benefit both the country’s development and its democratic process, despite challenges that need to be addressed.

UNFPA executive director Babatunde Osotimehin said in his statement read out during the report’s launch that the census’ results could help the Myanmar government and civil society to “address disparities and inequalities across and within Myanmar society”.

UNFPA says the results of the census, conducted by Myanmar’s Immigration and Population Ministry with UNFPA support, show progress since the last census in 1983 and ongoing challenges, including regional disparities and social indicators that lag behind those of the country’s neighbors.

“Population growth, 0.89 per cent per year, is less than half the 1970s rate and slowing,” the census reveals.

It says there are 93 males for every 100 females, reflecting significantly lower male life expectancy and higher levels of migration by men. Half the population is under 27, but the proportion of children has started to fall.

The census says the average number of children per woman in Myanmar has declined to 2.3 from 4.7 in 1983.

“Life expectancy at birth, 66.8 years, has improved but is still one of the lowest in Southeast Asia. Life expectancy is six years longer for females than males,” it says.

Infant and under-5 mortality rates are reported to be high nationwide, 62 and 72 per 100,000 live births, respectively, and nearly twice as high in some states as in others.

UNFPA says additional results that require more time for analysis and consultation on ethnicity, religion, occupation and maternal mortality are scheduled for release next year.