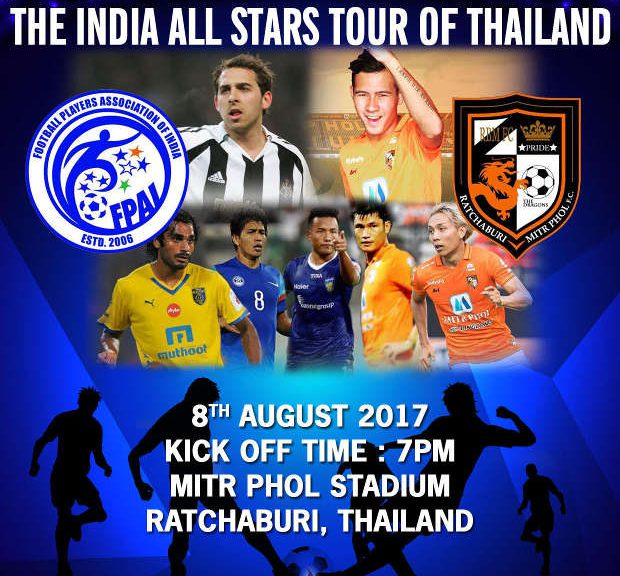 A first of its kind, football tour to boost Thai-North-East India Friendship through sports, knowledge and people to people exchange is being organized by Reach Sports Management, TranzPatkai, Askanthi Corp, Football Players Association of India and Ratchaburi FC, Thai Premier League Team. The All India Stars Football Tour of Thailand, which will support Thailand’s “Look West Policy” and India’s “Act East Policy”, will be hosted between 5-9 August 2017. The match will be played on 8 August between an Elite Thai team and the Indian team, which will comprise of 20 players, selected from the top leagues in India, most which will be represented from the North-East States of India.

The tour will comprise of a match, orientation and training sessions led by sports fraternities. The live match will be played in the expansive home stadium of Ratchaburi FC, Mitrphol Stadium. On ground training and orientations will provide international exposure to the participating teams to exchange learnings and enhance game skills and technical knowledge.

The North-East region of India and South East Asia have shared geographical landscapes, similar historical experiences, strong cultural and language affinities, community origins and a common interest in developing strong people to people bonds. Many communities in Northeast India share cultural and ethnic similarities with communities in Thailand, Laos and Myanmar including the various Tai ethnic groups such as Tai Khamti, Tai Ahom among others. Marking the 70th year anniversary of Thailand-India Friendship, the All India Stars Football tour will seek to strengthen this connection and enhance diplomatic, economic, educational and socio-cultural ties.

“Football connects people and nations, the idea behind the tour is to spread the message of peace and provide opportunities for social contact between the two countries” – says Bale Takhel, founding Trustee, TranzPatkai Trust and lead to the coordination committee from both the countries. Through the game the organizers also aim to escalate talent in both the countries and promote partnerships for sports education, training and sharing infrastructure.

Former Newcastle and England Junior international and Reach Sports Management co-founder Michael Chopra said, “We are happy to bring the best in Indian football talent to Thailand. It’s a relationship on the sporting front that we want to build and strengthen between the two nations, while for the players it is an exposure to the game of the other country.”

Official promoter Reach Sports Management was recently incorporated by former English Premier League player, Michael Chopra and Bale Takhel to help promote football in South East Asia particularly in India. The All India Stars team will be led by Renedy Singh, Former Captain of India and current President of the Football Players Association of India. Singh will be assisted by Michael Chopra former Newcastle and England international who is currently playing in the Indian Super League.

The lead sponsor for the event is PT Bemi Energi Indonesia and other sponsors include Sivana Hideaways Thailand, Motor World Bangalore Football Club, Sportsbay.in, Blue Elephant Group, Thailand among others.

The tour is the first in the roadmap for promoting the game in the region and further strengthening people-people led India’s Act East Policy Initiative. It can be a gateway to promote trade and tourism and more importantly Co-operation between Thailand and India.