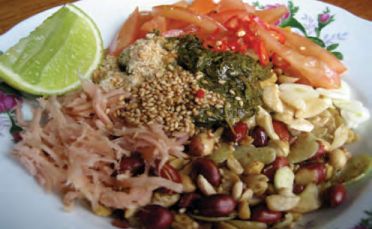 Myanmar’s rise from the ashes of political turmoil, cultural stagnancy and severe isolation is a monumental historic feat. The ushering in of democracy has adequately released it from the unsparing shackles of military suppression and has catapulted it onto the expansive path of progress, aggressive aspirations, development and integration with the mainstream global canvas.

Buried in its shadowy past has been its most delectable and distinct food experience, popularly known as the Burmese cuisine. Inhabited by various ethnicities and nationalities, Burmese food specialty varies from region to region; each region serving a specific delicacy with their own recipe and style of cooking. In effect, a trek through Myanmar’s coast towards the inland or traversing the northern and southern regions of Myanmar are sure to delight one’s epicurean journey.

An authentic Burmese palette blends in varied flavors – hot, sweet, sour and salty, by serving multiple side dishes and accompaniments along with the main dish. For example, bitter leaves, dried chilies and salty fish paste may accompany a mild curry. It is this richness that makes it so unique and appetizing, and worthy of being placed on the global cuisine frontier.

Situated on the crossroads of gigantic civilizations of China and India, and bordering the countries of Laos, Thailand and Bangladesh, Myanmar has naturally and inadvertently acquired their distinct characters and culinary influence, while exploring and retaining its own novelty. From the gamut of Chinese dumplings and boiled vegetables to the Indian inspired curries, samosa and biryani, Myanmar staple food has remained constant for years: rice.

From driving the country’s economy as being world’s largest exporter, rice has become the bedrock diet for many people in Myanmar. Htamin Jin in Burmese, rice is usually served with curry, soup and multiple condiments that a Burmese cuisine is characterized of. Either boiled or relished as flat noodles, from being a breakfast or a light snack to being savored as a dessert on the streets, it remains the backbone of any Burmese meal.

Rice noodles or locally known as Mohinga or Mohinka. It is a favorite dish among the locals, enjoyed as breakfast and also as a filler light snack in between meals. These round rice noodles are served in fish paste and shallot broth with a hint of onion garlic adding to the flavor. Topped with veggies, boiled eggs, sliced banana pith and akyaw fritters, it is usually sprinkled with dried chili, lime and coriander. Its preparation varies throughout the region, depending upon the availability of ingredients.

A salad for Burmese people is an aggregation and experimentation with diverse elements. An unusual mixture of everything which is crunchy, salty, spicy and sour is concocted as a salad. Laphet Thoke, the most popular and thoroughly enjoyed salad constitutes pickled green tea leaves interfused with amalgamation of sauces, and crunchy and sour assortments; sesame, shrimps, ginger, lime, fish sauce, peanut oil, peas, nuts etcetera. It can be served as a snack or accompany a plate of rice.

Nan gyi Thoke, dry rice noodles in the shape of spaghetti is also a salad based dish, relished with chicken, fish curry and garnished with chickpea flour, chilies and turmeric.

The Northern interiors of Myanmar are famous for Shan Noodles, reflecting country’s predominant Buddhist group’s delectable food trails. Served in chicken or pork broth, it is seasoned with garlic oil and sesame with pickled vegetables. In comparison to southern or coastal Burmese noodles, Shan noodles are bland and simple in texture.

Another dish that exhibits Shan specialty and deserves to be mentioned is fish rice or commonly called Shan style rice. Served with the sides of raw garlic and leek roots, it’s oily and is cooked in turmeric.

Curried noodle soup, Khow Suey, is another dish fundamental to Burmese cuisine. Its ingredients involve coconut milk, curried chicken and egg noodles. Like any other Burmese dish, this too gets accompanied by disparate condiments. However, as per the availability of ingredients, its recipe can be tailored to one’s preference.

Tea houses cannot be given a miss while talking about the eclectic Burmese cuisine. These are the small and scattered tea and snack hubs brimming with voices greeting political affairs and social customs with great gusto and zest. Bursting with a medley of Chinese, Indian and local dishes; noodles, steam buns, samosas, the local tradition of tea shops have evolved as an integral part of the Burmese cuisine.

Burmese desserts, colloquially termed as moun, usually gets its sweet flavor from its corresponding ingredients than sugar itself; sticky rice, fruits, grated coconuts act as sweeteners. Moreover, they are relished as snacks like semolina flour with coconut milk, pancakes with raisons etcetera.

If the food trajectory of Myanmar feeds the nonvegetarians quite sufficiently, vegetarians are served adequately well too with fresh vegetables and fruits available abundantly. Also, the Buddhist sanctity prevalent in the country makes vegan diet an essential part of everyday life of Myanmar.

With Burmese bounty ready to be served on the world platter, and geared to exhibit its vast regional spread through plethora of its native treats and cuisine, the World awaits Myanmar’s food treasures to satiate its South East Asian appetite in glory all renewed and rediscovered.