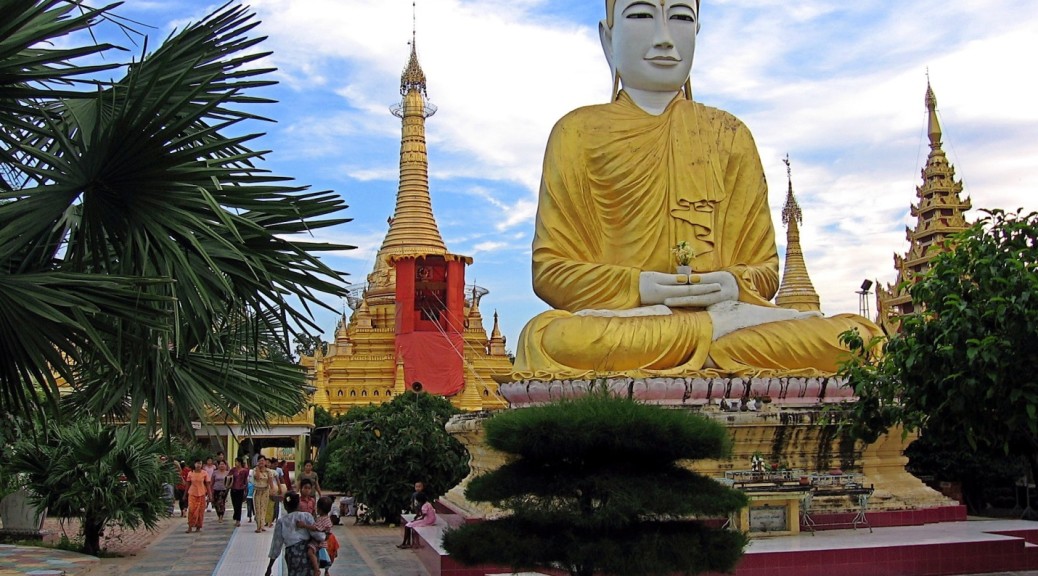 A vast majority of people in Myanmar practice and follow the religion of Buddhism. Buddhism, founded in the late 6th century B.C. by Siddhartha Gautama (the Buddha –  (literally the “Awakened” or “Enlightened One”) passes on the wisdom of peace, the act of dharma as models for religious life to achieve nirvana, building of positive karma and preaches the philosophy of compassion towards all beings.

The history, art, culture, way of life, traditions, architecture, society formation, practices and beliefs of the people of Myanmar reflects the religious teachings of Buddhism and draws inspiration from it in their day to day living, philosophy of life and the spiritual path. Myanmar has the most number of Monks in the world and the presence of mesmerizing Pagodas throughout the country attracts tourism and makes up for maximum economic flourish. A large number of the population serves as local guides to tourists, who come to visit this ancient land for its fascinating architecture and its history and culture.

The study of Buddhism is inculcated in children in Myanmar from a very young age. They spend most of their day dedicated to learning and reciting the Sutras. Monks begin their days at the monastery by cleansing the temples and carrying out their duties, chanting and recitals. It is integrated in their lifestyle right from birth and is practiced through every stage of life. Young boys at the age of 8 have to enter the Buddhist order and at least once again after they cross the age of 20. Staying in a monastery is seen as a blessing and even young girls; get their ears pierced during this time when their brothers enter the order. The whole family comes together and seeks blessings at a Pagoda in their vicinity. In Myanmar, the majority follows the Theravada branch of Buddhism, which emphasizes a more rigorous observance of the monastic code and is a collection of the oldest recorded Buddhist texts, as its doctrinal core. The art and craft in Myanmar is also greatly influenced by Buddhism. Artists are working on creating Buddha statues, carving and casting them. There are many Buddha statues, Pagodas and Stupas that render it cultural richness, acclaims it as a heritage site. This is also a driving force behind the economy by making it a popular tourist hub. Myanmar’s culture bends the faith of ancient Hindu beliefs, Buddhist beliefs and other religious beliefs. Many of its festivals and traditions have originated from Hindu traditions such as Thingyan, the water festival.

Marriages in Myanmar do not follow a religious ceremony and the couples usually get themselves registered at the registrar’s office and are mostly arranged by families. Death in Myanmar follows Buddhist rites and a monk is called upon to perform prayers and chanting. Families are given Buddhist scriptures to understand the impermanence of life in order to cope with loss of a loved one.