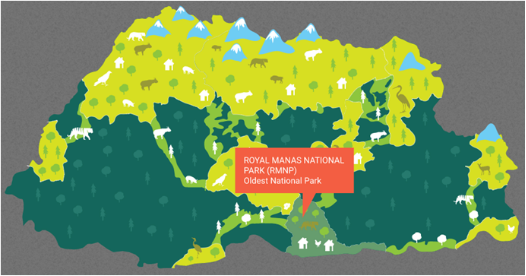 The objective of Balipara Foundation’s visit to Royal Manas National Park was to explore the rich biodiversity of the Park which shares its border with India’s World Heritage site, Manas Tiger Reserve, and to collaborate with Royal Manas National Park for Certification Courses on Plant and Diversity Survey Methodologies for the Forest Guards at the Eastern Himalayan Naturenomics TM School.

Magical, exhilarating, thrilling and unique- to the say the least, sums up our trip to Royal Manas National Park. Immersing ourselves in the sights, sounds, textures, smells, motions, feelings and subtle messages disseminated by nature.

Stepping on the International Boundary of India and Bhutan- Mathanguri

Situated on the banks of the Manas River in the midst of the dense Manas forest, the Mathanguri forest lodge is completely disconnected from the rest of the world. We arrived at Mathanguri in the evening after a three hours’ drive from Guwahati. A blissful view from Mathanguri (Indian side), the beautiful landscape of Royal Manas National Park can be witnessed. All you could believe right there is that the whole existence is joyful.

In the Heart of Nature: The Royal Manas National Park

The spectacular view of the river flowing, the sound with a cuppa tea in our hand, burbling of the stream as it travelled along its bed, bubbling over rocks, the breath-taking view of the colourful flags blowing in the wind- it was indeed the happiest morning. The location ensures you remain completely cut off from the rest of the world. First started in 2013, 13 receiver’s stations are available till date.

Till now 104 chips have been inserted. By the end of this year they expect to get the results as they had downloaded the data three months back and sent it to USA for analysis.

A wonderful initiative by the Department of Royal Manas National Park – The objective of the Golden Mahseer Project is to see the migratory pattern of the Golden Mahseer; how far they can go upstream. Fishes are caught and pencil battery size chips are inserted and then are kept for 15 minutes in water until it is left unconscious and then its sense is back and released.

At the Royal Manas National Park, some receiver’s stations are kept; when the fish moves, the station receives the signal for the tagged fish.

Thus, one fish that gets caught right here in Manas moves up to 48 kms upstream. This helps in assessing the fish movement in the rapid river.The project has been sponsored by WWF Bhutan with the support from Fish and Wildlife Foundation of USA. The Forest Department has been trained by researchers from USA for the surgery. The surgery does not affect the fish morphology or behaviour. A very small fraction of the body is cut just to insert the pencil size battery. They also put some amnesia so there is no pain. Initially the validity of chip was for 3 years. In 2016, new chip was made that lasts for 10 years provided that the receiver’s station is functioning well and the fish is alive.

Basically, the fish that has been tagged has different code numbers. Whenever the fish passes through the receiver’s station the code is picked up by the signal. The station has plenty of data as the fish always moves up and down. After every 5 seconds the signal can be received by the station.

It was a leisurely trek in the forest in the early hours of the day in Royal Manas National Park. We walked here like we were kissing the earth, opening all our senses, absorbing the atmosphere of the forest and relishing the feeling of belonging, being part of this beautiful living and breathing world. Through the interactive nature walk of 8 km we experienced the thriving and threatened biodiversity of the region. And as early mornings are typically better for birdwatching- an excited stir goes up in the group as we spot different birds in our trail. Thereby, an unparalleled biological treasure in the Eastern Himalayas – Royal Manas National Park represents the largest example of tropical and sub- tropical ecosystems in Bhutan. Courtesy –
Karishma Ahmed is a NaturenomicsTM Executive at Balipara Foundation. As part of the team, her efforts are centered on organizing forums & programmes, communication outreach strategy and to coordinate and manage communication & branding objectives of the Foundation. Her other interests and expertise include socio-economic research with a special focus on gender empowerment and Ecofeminism.