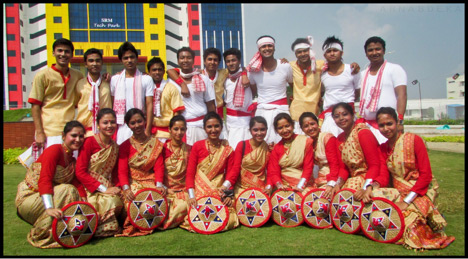 In India, just as the New Year starts, the month of January brings many harvest festivals along with it. Some of these festivals include Pongal in Tamil Nadu; Lohri in Punjab; and Makar Sankranti in northern and western regions of India. The North Eastern state of Assam is also home to one such festival called Bhogali Bihu. It’s a colourful and fun filled festival which is thoroughly enjoyed by all the people of Assam. On this day political leaders greet common people and sweet words containing messages of tolerance and love are spoken to each other. All the different communities residing in Assam come together and celebrate their oneness with nature.

This year, the Bihu festival was celebrated on January 15 and it was just as wonderful as it is every year. Over the years modernization has started touching and creeping into the North Eastern lifestyle. Some of these aspects had an effect on the Bihu festival as well and resulted in some what changes being made to the traditional dresses, songs, and dancing. For this year’s Bihu festival, Saodou Asom Bihu Sanmilani Somonnoy Rokkhi Samiti issued a list of rules and pleaded people to go back to the original traditions and culture.

The appeal made by Saodou Asom Bihu Sanmilani Somonnoy Rokkhi Samiti had some effect and this year’s Bihu festival turned out to be more traditional and culturally pure than it has been in the last few years. “Magh Bihu” is a festival of enjoyment through singing, dancing, and feasting on mouth-watering dishes.  Despite refuting some of the modern influences it had picked up with time, this year’s festival was still a wonderful and extremely entertaining affair.

On the eve of January 15, men went to the field and built a makeshift cottage which is called Bhelaghar and a bonfire called Meji. At night community feats were held all over Assam and at these gatherings people gathered around Meji and sang Bihu songs, played dhol, and participated in various games. The next morning all the men took a bath and then commenced to set fire to Meji.  All the others gathered around the burning Meji and threw rice cakes and betel nuts in the fire. While doing so they offered their prayers to the God of Fire and marked the end of the harvesting year.