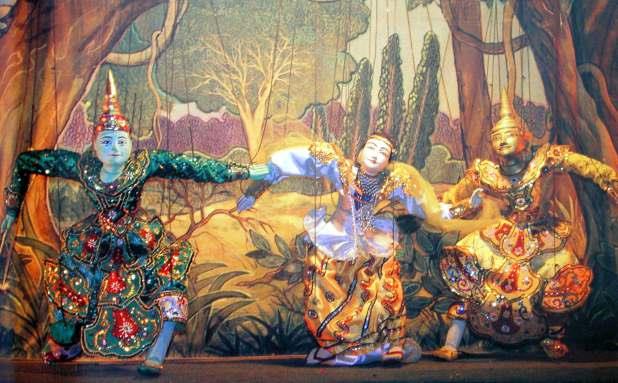 The Yangon-based marionette troupe HtweOo Myanmar Traditional Puppet Theater has swept the award for the Best Puppet Animation award at the Harmony World Puppet Carnival held in Bangkok. The Burmese puppeteers outshone the competition and emerged winners over 160 other puppetry troupes from almost 70 countries around the world. They were awarded a cash prize of US$1,000. The Burmese puppeteers presented the famed art of yoke thé at the carnival, bringing to life the story of the noble princess Thambula in their drama “ThawtithenaThambula”.

The performance also included choreographed dances that complimented the ballad. The troupe cut short the yoke thé performance at the carnival to limit it to an hour, even as the original format of a yoke the recital runs through the night. The director of the HtweOo theatre, Khin Maung Htwe said that they shortened the puppet show to fit the time slots and that taking into account the multi-cultural audience. Yoke thé, which is often referred to as poetry in motion, has once again started gaining popularity in Burma after a waning spell in the past. This art of marionette puppetry, nurtured by royal patronage, emerged as a popular form of entertainment for a wider audience in Burma connecting them with some of the most treasured folklores passed on through generations. Yoke thé, which literally translates into “miniatures,” embellishes intricately designed miniature puppets, employed by 18 (for male characters) or 19 (for female characters) wires with each puppet controlled only by one puppeteer. The Burmese art of puppetry, said to have been the preserved form of entertainment for royalty once upon a time, is often known to bring to life the fables and themes from Hindu and Buddhist mythology as also the captivating love stories.

We are filled with wonder at the sight of the puppeteer’s dexterity in performing the marionette’s movements like real human beings. This also clearly reveals the high standard of Myanmar Puppets as well as the real image of Myanmar arts.