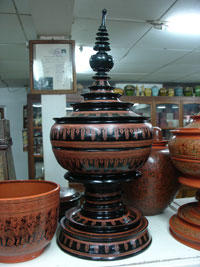 The lacquer takes its roots in China it there has a few three thousand years, and then developed in all the Southeast Asia. In Myanmar the tree which one takes the resin is it Thit-si. These trees push naturally in whole forests almost in all Myanmar in light altitude. One takes the resin, a little like one does it with latex, by notches at the base of the trunk on which one fixes small bowls in bamboo. The sap of the lacquer tree has a very strong adhesive quality and a splendid brilliance. It has many qualities as to make impermeable the objects which it covers. It adheres on many surfaces, bamboo, woods, sheets of palm tree, metal and leather. It resists the insects and guards on all occasions its flexibility. In Myanmar, the origins of the lacquer seems to come from Bagan about 12th – 13th century. One of the oldest lacquers was indeed discovered in the pagoda Mingalazedi, one of the built last with Bagan (at the 13th century). Always it is that it is in Bagan that the manufacture of the lacquers acquired its letters of nobility. The raw material used to manufacture the objects is the bamboo. The bamboos used to make the inner part of the lacquerware come from the forests of the Chin State and which is transported by boat until Bagan. The bamboo then is cut out, softened, worked to give the shape of the desired object: bowls, dishes, vases, cuts, plates, various boxes, most famous being the box for betel leaves and nuts. The craftsman draws up the bamboo on forms. In certain cases one uses also the hair of horse. One carries out the first lacquering the interior is co

vered with “Thayo” a made resin paste with lacquer and mixed ashes. This work is in general carried out with the hand (or with very fine gloves). The number of times where the object of layers will be coated determines the quality of the lacquer (at least to count seven times for a beautiful lacquer). The layers of lacquer are coated with the hand to guarantee of it the smoothness, but also the regularity. The craftsmen who carry out this work used this technique since generations and generations. Most of the lacquerware makers are families working on this from generation to generation. When an application is made on the mould in bamboo, one must then dry it in an obscure and wet place. The duration of drying is of approximately a week. All the workshops of lacquer have thus places corresponding to necessary qualities where they store the lacquers in manufacture.

If the moisture is not sufficient, then good quality lacqureware will not be produced. Once finished drying, the lacquers carefully are washed and sandpapered if necessary. This stage is important for the quality of the future lacquer. This washing and sandpapering is carried out some time with charcoal, resulting from very widespread trees in Myanmar like teak. After the first drying, one carefully sandpapers the object, one washes it, then one passes by again, the second layer and one turns over to drying. As one passes by again of the layers, the mixture is increasingly fine, one uses ash of ox bone. When the new layer was well spread out, one erases the possible finger marks with a fine fabric.

The object thus makes several outward journey and return with the warehouse of drying. Each time it thus receives a new layer of lacquer. It is only on the last layer that one colours. The colors are usually red, green, blue or yellow. The color is obtained by adding powder of mercury cinnabar to the lacquer. This mixture is called Hinthabada. After last drying for the 7th or 8th times, the lacquer is again sandpapered with teak wood ash, then washed carefully and it then will be decorated. Engraving is done with free hands, without model, entirely of memory, directly with naked hands, using a stylet and of a brush. The lacquer is inalterable, and the objects in lacquer can preserve all their beauty during years. Not only are the small objects enameled, utensils of crockery, or another objects of worship, but also of the pieces of furniture, the cupboards, the tables, large decorative objects, the musical instruments, earthenware jars etc… are being decorated with beautiful colors.

After carrying out all theses processes, the lacquerware are now marketable throughout the country and to overseas.