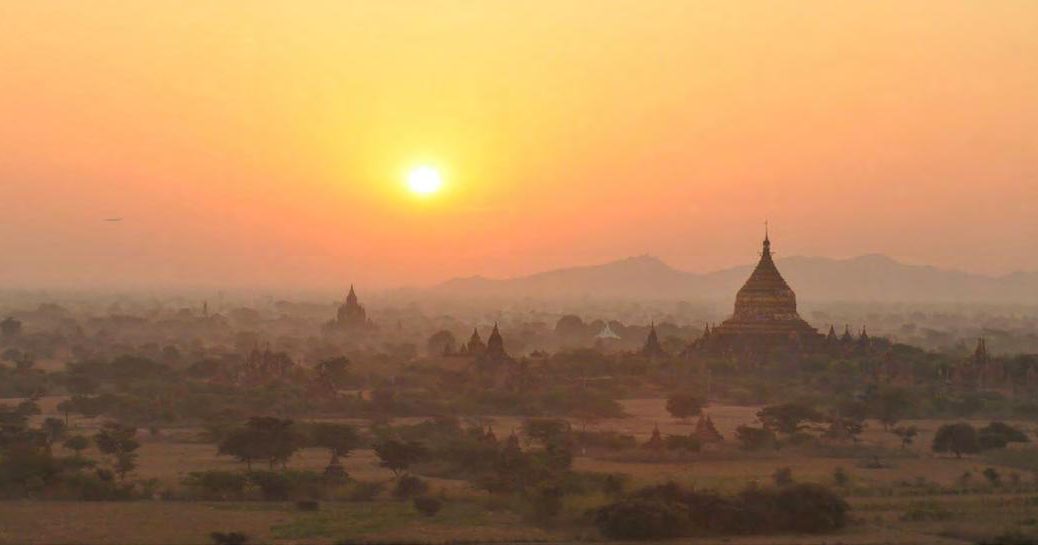 Lying on the banks of the mighty Irrawaddy river – 150 kilometers south-west of Mandalay, the vast plain of Bagan is a home to thousands of Buddhist temples that combine to form one of the richest archaeological sites in Southeast Asia and an extraordinary testament to the religious devotion of Myanmar’s people and rulers over the centuries.

Along with offering views quite unlike anywhere else on the earth, one of the beauties of spending time in what is now officially called the Bagan Archaeological Zone is that, once you have paid your K25,000 entry fee, you have the freedom to explore this fascinating area at your own leisure. Bagan is in general more-touristy and possibly less of the ‘real Myanmar’ than other parts of the country, but despite obvious sales ploys such as a multitude of children selling hand-drawn postcards, you will rarely suffer the hard sell – and the locals remain warm and friendly. Bagan (formerly known as Pagan) was the capital of a large influential kingdom from the ninth to the thirteenth century. This kingdom was the first to unify the area that is now Myanmar, establishing the Burmese culture and ethnicity as well as Theravada Buddhism in the region. Over this period of rule, as the city and kingdom grew in stature, over ten thousand temples were built on the surrounding plains.

Mongol invasions eventually led to the fall of the Kingdom of Pagan, the city was reduced to a small settlement, never to recover its past glory. The area did, however, remain a destination for Buddhist pilgrimage. A few hundred temples were added between the thirteenth and twentieth century, but the extensive earthquake damage over the years meant only 2,200 temples remained, in differing states of repair.

Indeed, over the last five hundred years, many of the existing temples have been renovated – a process continuing till date, has yielded mixed results. Many say that Bagan has not attained the UNESCO World Heritage site status due to the Myanmar government’s insensitive updates in the 1990s, although it is once again being considered. However, the area is large enough and there remains so much of what is original still to see, that none of this stops the area from being a unique wonder to behold. A Vast and Diverse Area

Each of the 2,200 plus temples, stupas and pagodas has its own unique story to tell, and many can be freely explored inside and out. Some are locked, but even if you are traveling around without a guide, you can sometimes find a friendly local nearby to open them for you. The most spectacular time to see the temples is when the sun dramatically rises and falls over the plain at dawn or dusk.

A large earthquake hit Bagan in 2016 and caused significant damage to some of the temples, but ironically, much of it was to the more modern additions to the then ancient structures. Many believe that the quake may actually end up encouraging more sensitive development in the area, and the vast majority of temples are now once again free to be explored.

Exploring the Temples and Plain

There are a number of ways to explore the area:

This is the cheapest way to get around, and allows the most freedom to do as you choose; the plain is too large to explore by foot, but getting around by bike allows you to get to most of the temples. Almost all hotels and guesthouses offer them for hire, as do various restaurants and shops on the popular ‘Restaurant Row’ in the town of Nyaung U.

You can also cheaply hire an electric bike – through on the flat plains of Bagan, the advantages over a bicycle are minimal (tourists are not allowed to use motorbikes in the area).

You can pick up a free tourist map showing you the main points of interest; although you are unlikely to get seriously lost, it is worth planning your trip in advance to make the most of your time. Bear in mind that it can get hot and dusty when cycling, particularly during hotter times of the year, so carrying water is essential and helps you beat the heat. You can pick up refreshments at the many restaurants and tea shops in the area.

This is the most romantic way to tour the temples. Most drivers can speak minimum English and have the profound knowledge of better routes around the temples along with few hidden gems. However, horses have to follow more well-trodden tracks than bicycles, as there are areas they cannot reach. Prices range from K15,000 to K25,000 for a day, depending on the season.

If you want to avoid the heat and dust completely, take an air-conditioned taxi or minibus. This is naturally the most comfortable way to get around, and most drivers speak some English. Cars will usually cost between $20 and $50 per day, depending on the season and how far you travel.

The most exotic and spectacular way to see the temples is to head to the sky. Trips cost USD285 per person and offer a unique view of the plain and temples. You should always book well in advance, particularly at popular times of the year such as Christmas and the New Year (the ballooning season runs from October to April).

Taking two or more days and using different forms of transport can be the best way to explore the plains. If you see the highlights by horse and cart or hot air balloon, then following it up with a bike ride can be the ideal way to find the specific temples that have taken your fancy. A Guide to the Top Temples

The best approach to explore temples with a guide, but you can also get some advice from a friendly local and start exploring on your own. There are some sites that should not be missed, which include:

Away from the towns and most famous temples, exploring off beaten tracks can be a lot of fun; the pagodas that can be found east of Nyaung U, along with the banks of the Irrawaddy, are a good example. Here you will find open temples with beautifully preserved interiors, from the top of which you will see fantastic views over the river – and hardly other tourists.

For more background, history and more impressive collection of artifacts from the region, head to the Bagan Archaeological Museum, located off the main road near the river bank in Old Bagan (entry$5).