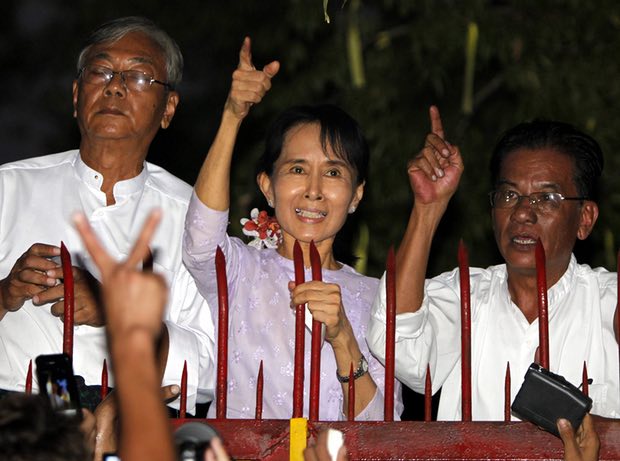 It was never meant to be this way.

The script called for the lead actor, a Nobel prize winner, to seize control of a country, bring peace where there was conflict and prosperity where there was poverty. A nation emerging from years of military dictatorship was to become a beacon of hope not only for its cowed population but also for much of a fractured and turbulent south-east Asia.

But like many political dramas – especially over the past 12 months – the script has not been followed by Myanmar and its de facto leader, Aung San Suu Kyi.

Now, a year since one of the world’s most famous prisoners of conscience came to power in the specially created position of state counsellor, the talk is not of progress.

Instead, it is of drastically escalating ethnic conflicts that have simmered and sporadically exploded for decades; a new Rohingya Muslim insurgency that has prompted an army crackdown some say may amount to crimes against humanity; a rash of online defamation cases that have fostered a panic over freedom of speech; and a repressive legal framework that allowed the generals to jail so many still being in place. And all the while, Aung San Suu Kyi is accused of remaining mostly silent, doggedly avoiding the media.

Interviews by the Guardian with more than a dozen diplomats, analysts and current and former advisers reveal frustrations with a top-down government struggling to cope with immense challenges. Aung San Suu Kyi’s questionable leadership style, her inability or unwillingness to communicate a vision, and her reluctance to speak out against the persecution of minorities have raised the question of whether the popular narrative is misplaced.

And although some defend her, saying it takes time to right the wrongs of decades, others see a fundamental misunderstanding of the woman herself.

“Many of the people who led the campaign [to free Aung San Suu Kyi] … were more on the liberal side of the spectrum,” one diplomat put it. “I think she’s closer to a Margaret Thatcher.”

It’s a stark contrast to the Aung San Suu Kyi who, during 15 years of house arrest at her lakeside villa on University Avenue in Yangon, stood on rickety tables and delivered speeches about human rights over the gate.

“And she was electric,” said David Mathieson, a longtime Myanmar researcher for Human Rights Watch who is now an independent consultant. “She was funny. She was informative. She was principled … And I think it’s lamentable that she’s not doing the equivalent of that now.”

It is here, in the so-called Abode of Kings supposedly built to insulate Myanmar’s generals from attack, amid a landscape of deserted 20-lane highways and grandiose hotels, that Aung Sun Suu Kyi lives her life in power.

The 71-year-old is a disciplined ruler. Her habit, established during imprisonment, is to wake before dawn and meditate in the house she shares with her pet dog and a small retinue of maids.

She has breakfast with an adviser, often Kyaw Tint Swe, a former ambassador who spent decades defending the junta’s actions.

An aide, Win Htein, says Aung San Suu Kyi eats very little. “The amount of food she is taking is like a kitten,” he said. “She doesn’t eat carbohydrates. Fruit and vegetables. No pork, or mutton, or beef. Only fish.”

Her few indulgences include a vast wardrobe of luxurious silk longyis and evening film viewings, musicals being her favourite. Win Htein recently gave her a copy of La La Land.

But mostly she works. And there is a lot of work.

As well as state counsellor – a position created to get around the military-drafted constitution that bars her from the presidency – she is foreign minister, minister of the president’s office and chair of numerous committees. Widely described as a micromanager, she pores over documents after hours. A source close to the attorney general’s office says she asks to see a copy of every draft bill before it is submitted to parliament. Ministers routinely pass decisions upwards.

“The problem is there are no policymakers in her cabinet,” said Burmese political analyst Myat Ko.

People who know her say Aung San Suu Kyi inspires both devotion and fear. She is variously described as charming and charismatic, and sharp and authoritarian. “She feels like a real leader,” one diplomat said. “Intelligent, quick-witted, quite funny.” At the same time, he added: “I would say that she has appeared to be very keen to be the sole decision-maker to have no chance of establishing rival power centres.”

Echelons above her subordinates in stature, the state counsellor is often depicted as living in a bubble, surrounded by a cabal of advisers who are too nervous to convey hard truths. A Yangon-based analyst working on the peace process said bad news often does not reach her.

“In meetings, she is dismissive, dictatorial – in some cases, belittling,” said a senior aid worker who, like many others interviewed for this story, insisted on anonymity because he works with the administration. The government, he said, has become “so centralised, there is complete fear of her”.

This is not the administration many hoped for when the National League for Democracy (NLD) took over the government last year following victory in the 2015 election. The circumstances of this seismic shift in Myanmar has admittedly been far from ideal for cohesive, effective government. The army has retained control over key ministries as well as the security forces. But the election and transfer of power from the previous military-backed government were smooth.

Meanwhile, western diplomats continue to give Aung San Suu Kyi the benefit of the doubt. Few supported the establishment of a UN-backed commission of inquiry – the highest level of probe – on the Rohingya crisis.

“There’s a belief by some important actors that we just need to support her to steer the country,” said the analyst who works on the peace process. “That’s not been successful.”

Aung San Suu Kyi’s aides turned down requests for an interview. Win Htein, who also works as the NLD spokesperson, praised her silence as politically astute and said media interviews were too “time-consuming”.

Win Htein – a man in his mid-70s who sleeps with an oxygen tank – has a reputation as the party disciplinarian.

Speaking at his home, a military-style dormitory for MPs in Naypyidaw, he added: “Please tell those who are disappointed in Daw Aung San Suu Kyi or in us just [to] look at the history … More than 27 years we have struggled. Through real hardship. So this point is too early. They have too high expectations.”

So far, the government has successfully clamped down on corruption and fostered a climate of free speech, he said, adding that “there is an argument for both sides” for the 66D clause. He said claims that Aung San Suu Kyi was the sole decision-maker in her cabinet were “rubbish”.

Governance, he said, has meant constant negotiation with the army. Members of the military-backed Union Solidarity and Development party have told him they plan to challenge Aung San Suu Kyi’s state counsellorship as unconstitutional.

Win Htein’s views on the Rohingya reflect common prejudices in Myanmar. He said the “Muslim lobby” exaggerates the plight of the group, even though 120,000 have been confined to camps in Rakhine state since 2012. He said the “illegal immigrants are flowing into our country like a stream since many decades ago” and that Islamic practices are incompatible with Buddhist beliefs.

Win Htein cannot speak for Aung San Suu Kyi. But it seemed pertinent to ask if he thought she might have private sympathy for the Rohingya.

He paused and then said: “No.”