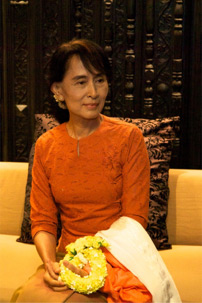 Aung San Suu Kyi has openly criticized The Union Peace Conference in the past and therefore no one expected her to be present on the occasion. However, she surprised everyone by suddenly appearing at the event and even making a speech there. These talks were attended by the military, members of parliament, and some of the armed guerrilla groups that are with war with Myanmar government. Ms. Suu Kyi’s presence and speech at the event would surely provide a big boost to the chances of the talks being successful which can bring about a much needed long term peace in country. Even though Ms. Suu Kyi is banned from becoming the president of Myanmar as per the country’s current laws, she has still made it clear that she intends to lead the country through her party National League for Democracy which scored a landslide victory in the recently held Myanmar elections.

The Union Peace Conference was held in Naypyidaw on 12th January, 2016. Aung San Suu Kyi’s initial objection to the event was linked to her disbelief in the intentions of the army. She had dismissed the ceasefire agreement reached last year between the army and some of the armed rebel groups as a pre-election stunt. However, her now showing up at the peace talks and participating in it shows that she is willing to work harmoniously with the previous government leaders and the army towards the betterment of Myanmar. Her involvement may also help to persuade the other rebel groups who have been so far resisting the peace process to lay down their arms and enter negotiations with the government.