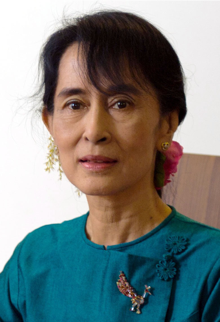 Aung San Suu Kyi has not stopped to rest after her political party the National League for Democracy scored a huge win in Myanmar elections. This win is a huge accomplishment and it is a huge step forward in the direction of Myanmar becoming a complete democracy. Soon after this major victory, Suu Kyi has moved her focus towards accomplishing other things to make Myanmar a better place. The 70-year-old charismatic and tireless leader has started by leading the cleanliness drive in Myanmar. She was seen leading from the front as she walked the road in Kawhmu, which is her constituency.

She was wearing plastic gloves and herself picking up the litter and putting it in a sack. Seeing this, many villagers also joined her and started picking up plastic bottles and all other kinds of litter and putting it in the sacks they were carrying. Soon after winning the election in November, Suu Kyi had made a statement urging the new lawmakers to clean up their constituencies as the first step and she did the same herself. Aung San Suu Kyi believes that this cleanliness campaign will be good for both the environment and public health and it will also help Myanmar in attracting more tourists.