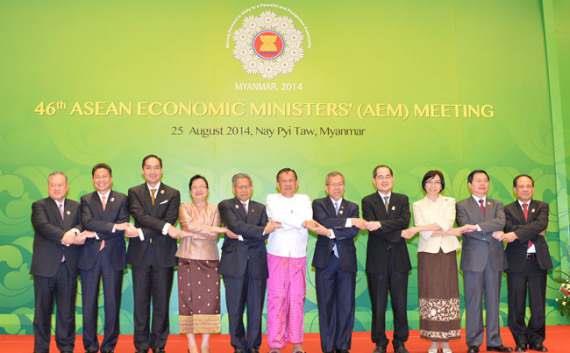 The 46th ASEAN Economic Ministers’ Meeting kicked off on August 25 in the capital Nay Pyi Taw of Myanmar, which is ASEAN rotating chair this year. Addressing the opening ceremony, Myanmar President U Thein Sein called on the member states to exert collective efforts for the regional economic integration through creating free flows of goods, services, investment, skilled labour and capital as envisaged in the ASEAN Economic Community (AEC) blueprint.

Myanmar is giving priority to small and medium-sized enterprises (SME) development, he said, adding that his country will continue to step up the implementation of the capacity building programmes for the four ASEAN member states – Cambodia, Laos, Myanmar and Vietnam.

Regarding ASEAN’s links with its partners, U Thein Sein applauded negotiations for the establishment of an ASEAN-Hong Kong Free Trade Area (FTA) as well as those on the Regional Comprehensive Economic Partnership (RCEP) so as to deepen and broaden the economic relations between ASEAN and its existing FTA partners in the future.

The four day meeting discussed the issues related to the AEC and review of the operation of sectoral working groups and the implementation of FTA agreements between ASEAN and its dialogue partners. The ministers also discussed a road map to their economic cooperation, focusing on the ASEAN’s service liberalisation, talks on the RCEP and the elimination of non-tariff barriers once the ASEAN Community comes into effect in 2015. Issues concerning service and investment liberalisation with Japan, as well as the upgrading of ASEAN’s existing free-trade pacts with China and the Republic of Korea were finalised at the meeting. ASEAN plans to sign four agreements on the liberalisation of services and amend FTAs with Australia and New Zealand. It will ink a FTA with India and a document on the acceptance of accounting professionals among its members.