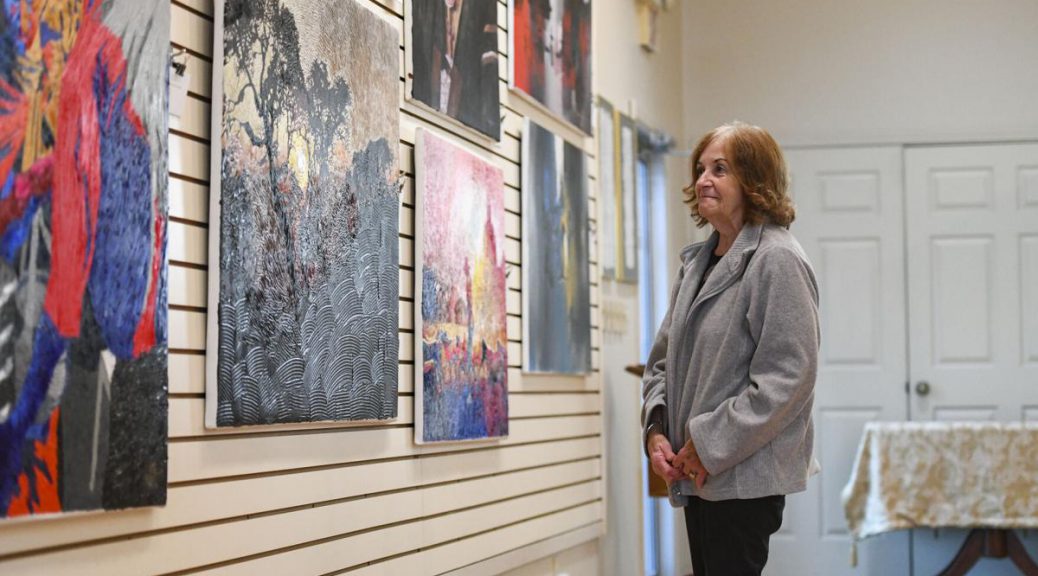 Myanmar is a country riddled with strife and mass killings.

According to the Assistance Association for Political Prisoners, a human rights organization based out of Thailand, more than 1,100 people have been killed in Myanmar (Burma) since the military took over in February.

Families sit inside their homes — many of them makeshift — and know bloodshed is just outside, said Jane Williams of the Logansport Art Association (LAA). Williams has been working with a group of Burmese artists, many of whom are either in refugee camps in Myanmar or have been released from the camps but lack freedoms available in the U.S.

The unrest of this Asian nation could dispel any notion of happiness, but this group of artists refuses to let that happen, she said, acknowledging that Fort Wayne-based Burmese artist Saw Kennedy, who was once in a refugee camp, has brought nearly 20 artists together for a cultural experience at the LAA at 424 Front St.

“He is bringing us these artists out of Myanmar to show us the better times,” Williams said of the 42 pieces on display at “The Soul of Myanmar” exhibition, which runs through Saturday, Oct. 2. While the majority are from the Asian country, others are living in Norway, Iowa and Fort Wayne.

Getting several of these pieces to Logansport was not easy. In fact, along with a variety of “creative ways” to transport them overseas, Williams said that some were smuggled out of Myanmar through PVC pipe. Many hands played a role in bringing the artwork here, she said, explaining that local resident Sunday Htoo was one of those individuals.

Showcasing the culture, history and rich beauty of the land and its people is that important, she added.

Kennedy agreed, stating in a release that “Even though we were once refugees, if we try and have confidence, if we have a strong vision of the future, and if we are passionate about our dreams, we will receive the most precious opportunity to continue working on our goals.”

His goal is to share culture and history while selling some work for the people in Myanmar. Proceeds from sales will benefit the artists who dared to share their visions of a country where peace seems constantly out of reach.

But whatever may take place in the next few days, Williams said these artists are more concerned with spreading their personal vision of a land divided.

Ko Sid’s series called “Stranger Face” depicts anger, innocence, vanity and struggle. The Yangon, Myanmar, resident stated in a description of his work that pieces are based on his emotions of the current events where people “feel less worth and kindness and more aggression.”

Those feelings are emblazoned across canvas through color highlights and strokes.

Another artist, Min San Shar of Mawlamyine, Myanmar, said that “art shapes him as a free man.”

Even as war rages on, Hei Ar Heison of Myanmar claimed that war, which has been a major part of his life, damages people. And through his art, the desire for everyone to work together has arisen.

Despite the devastation, it’s important to recognize that good can come of bad, said Williams. “Something beautiful can come out of devastation.”

That’s a lesson artist Ar Thet Oo discovered. Residing in Yangar, Myanmar, he said in an account of his work that as he paints the “beauty of poppies, (liking) the moving and dancing of the poppies … (he) realizes beauty is laced with the opium drug, and sometimes beauty contains ugly.”

And currently, that adequately describes his country.

But where bad lives, good triumphs, which is what Kennedy believes, said Williams. “Wherever you live, love what you do, try your best and you will succeed,” she said quoting her friend, claiming that’s exactly what artist Satt Aung T.T. has done.

Along with submissions for the LAA exhibit, Satt Aung T.T. also is competing in a juried show in Grand Rapids, Michigan, called “Art Prize.” If he wins, he could collect $50,000.