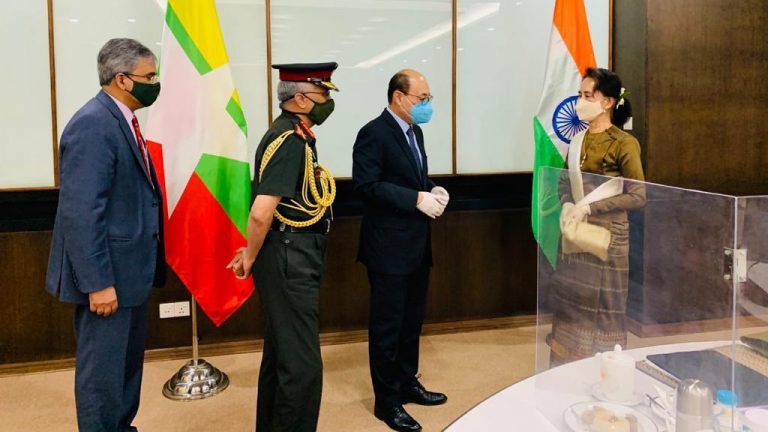 Indian Army chief General MM Naravane and and foreign secretary Harsh Shringla will comprehensively review ties with Myanmarese leadership so that there is no discrepancy in the exchange of views, according to South Block officials.

According to South Block officials, both Gen Naravane and Shringla will comprehensively review ties with Myanmarese leadership so that there is no discrepancy in the exchange of views. The highlight of the one-day two-day visit will be the coastal shipping agreement that will allow Indian ships to reach Mizoram via Sittwe Port on the Bay of Bengal and through the Kaladan river multi-modal link. This project has been hanging fire for the past 20 years when it was envisaged by the Atal Bihari Vajpayee government.

India and Myanmar will also discuss in increasing cooperation in the energy sector with New Delhi already investing more than $1.4 billion dollars into the development of hydrocarbon-rich off-shore blocks in the Andaman Seas.

While there is a significant presence of China in Myanmar in the infrastructure, hydrocarbon, power and ports sector, Naypyidaw is keen to develop across the board ties with India. The Myanmarese leadership is clear that its ties with China cannot be at the cost of the bilateral relationship with India.

During the visit of Indian top officials, the two sides will also discuss the issue of rehabilitation of the Rohingyas with India already discussing the facilitation of the refugees back to Myanmar. All three countries do not want Pakistan-based Islamist groups to infiltrate into the Rohingya refugee settlements on the Bangladesh-Myanmar border and radicalize them. Already there is evidence that Pakistan based Lashkar-e-Taiba and Bangladesh-based Jamaat-ul-Mujahideen group have sent their cadres to radicalize the Rohingyas.

“As India sees Myanmar as the key to develop and secure its north-east region, the dialogue with Naypyidaw will be comprehensive and discuss all aspects of the relationship,” said a senior official.