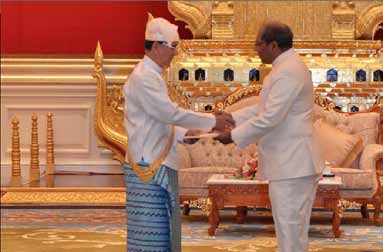 His Excellency, Gautam Mukhopadhaya, recently appointed Ambassador to Myanmar, graduated from Delhi University, joined the Foreign Service in 1980 and has served in various capacities in Indian Embassies in Mexico, France, Cuba, Afghanistan and Syria, the UN Mission in New York and the Ministry of External Affairs and Ministry of Defence in India. He has also worked in the UN Headquarters in New York as a Consultant on Social Development. He re-opened the Indian Embassy in Kabul in November 2001 after the ouster of the Taliban in Afghanistan. And most recently served as India’s Ambassador to Afghanistan from July 2010 to May 2013. As India’s representative to the Third Committee of the UN in New York (1996-1999), he dealt with issues relating to social development, human rights and advancement of women.

It is a great pleasure for me to address readers of Myanmar Matters. In the short period of its existence, Myanmar Matters has already established itself as one of the most readable and informative periodic bulletins on Myanmar of special interest to those interested in Myanmar and India, particularly business prospects, but also more generally. I heartily commend Globally Managed Services, and especially its founder, Mr. Ranjit Barthakur, for taking this initiative which can serve as a bridge between India and Myanmar as the latter moves to a new era of rapid political, economic and administrative reforms that have brought new hope to the country.

As a historical friend and neighbor and friend with whom it has had deep cultural, civilizational and political ties, not least during and after our struggle for independence, India stands ready to partner and extend a helping hand in all areas of Myanmar’s national life. Indeed, this has already begun in earnest. Though not a traditional donor country, it has already committed close of US$ 750 million in development assistance in both infrastructure projects to promote connectivity and increase trade and economic relations between our two countries and the ASEAN, but also human resource and capacity building projects in English language, entrepreneurship, Information Technology, industrial and management training to prepare Myanmar for a modern economy.

In addition, the Government of India has also extended soft loans of an approximately equal amount to the Government of Myanmar in areas of priority to it such as power, railways, irrigation, industrial development, tele-communication and other areas, making its total outlay for Myanmar close to US $ 1.5 billion. It ranks fourth in Myanmar’s external trade with a total trade turnover of US $ 1.9 billion and targeted to reach US $ 3 billion by 2015, and 10th in terms of foreign investments which presently stand at about US$ 280 million.

Nevertheless, given the size of India’s economy, its relative dynamism in spite of a recent slowdown in its rate of growth, its geographical proximity, its scientific, technological and entrepreneurial achievements and its political reliability, our economic relations are nowhere near their potential. The challenge before us as Myanmar opens up, is to build upon our historical, cultural and civilizational ties and political comfort, to enhance our connectivity by land, sea and air, expand trade, seriously step up investments, increase people-topeople and cultural contacts, and bring our economies much closer together.

Besides trade and investment and cultural relations, India can also contribute greatly to Myanmar’s political challenges. India’s experience of democracy and nation-building, its religious, linguistic, ethnic and cultural diversity, its handling of regional, linguistic, religious and tribal aspirations within a democratic polity, and its experience of market-oriented economic reforms in the context of poverty and social and economic disparities amongst other areas, can also offer valuable lessons for Myanmar’s political and economic transformation. In all these, Myanmar can also count on its sizable population of Indian-origin who have contributed to Myanmar’s economy and education in the past, and can do so even more now free from the legacy of colonialism. May I therefore take this opportunity, to reiterate that India is prepared to contribute to Myanmar’s future in any way that it can, in the areas of peace, development, investment, democracy and nation-building in general. I am confident that Myanmar Matters can play a catalytic role in this process.