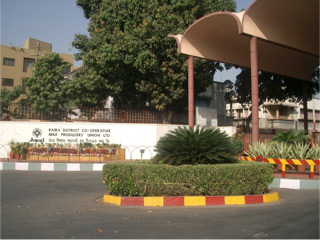 Amul, the Indian dairy giant, has decided to set up a processing unit in North East India. It is the brand name used by Gujarat Cooperative Milk Marketing Federation (GCMMF) to sell its dairy products. The enormous size of this company can be judged from the fact that every single day it procures about 14.85 million litres of milk from 18,536 village milk cooperative societies. Today this company has come a long way from what it was when it was formed in 1946. At that time GCMMF started operating with just two village dairy co-operative societies and only 247 litres of milk.

GCMMF has played a huge role in helping India to become the largest milk producer in the world. The firm makes huge sales all over India and by the end of this fiscal year it is expecting to earn annual revenue of Rs. 23,000 crore. Representatives from Amul say that this huge revenue is a result of its increased sales and neither has it increased its prices nor does it have any plans to do so at least for the next six months. Besides catering to the Indian market, GCMMF also exports its value-added products to over 50 other countries. Revenue from exports contributes Rs. 25 crore to its total annual revenue.

At the moment Amul has 60 processing units and it is already in the process of setting up two processing units in Uttar Pradesh. One of these plants is being set up in Lucknow and the other one in Kanpur. Both these plants are expected to become operational within the next six months. Amul is spending a total of Rs. 400 crores on these plants. GCMMF’s Managing Director Mr. R S Sodhi has confirmed that the company is looking at North East for setting up new manufacturing plants.

The reason behind this move is increase in the production costs at existing manufacturing units due to increase in the price of cattle feeds, labour and other costs associated with production and procurement. Besides the cost factor, Amul is also looking towards expanding its production capacity in order to meet the increased market demand.