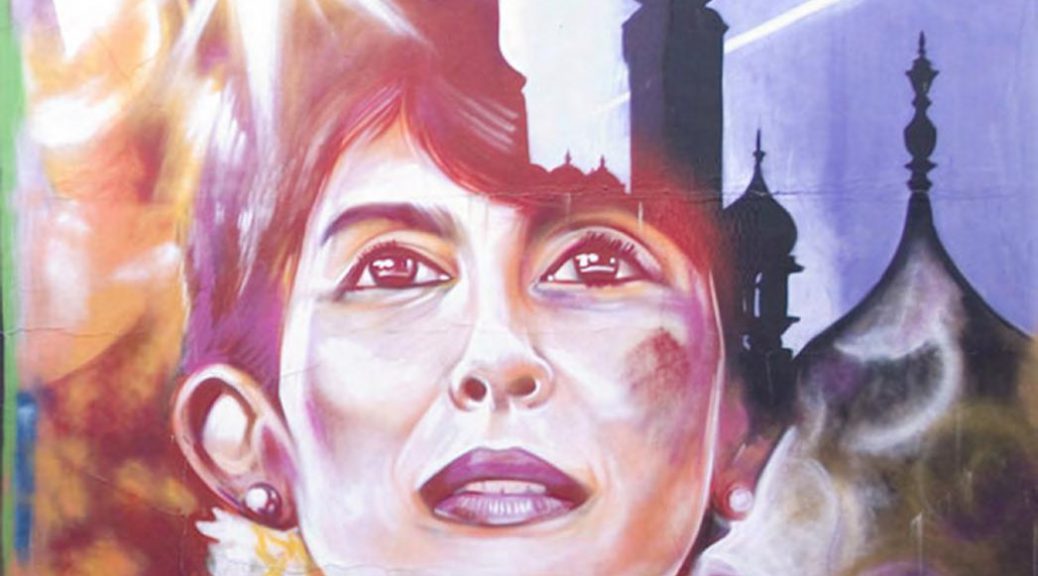 Her words ring true across the entire board, irrespective of region, society, or polity. Peacemaking is a participatory exercise that requires real consensus between entities that are inherently or traditionally antagonistic. This makes the process not just a hugely tricky affair, but also a painstaking exercise that warrants the time, patience, and a concrete vision. Yet, the single most pivot of peacemaking is the element of trust, without which any and every political dialogue process is bound to hit a cul-de-sac.

When assessing or critically apprehending Myanmar’s peace process, one must continually recall the history, geography, and the demography of the country;135 ethnic groups, most of which do not have sustainable cultural linkages, sixty painful years of political violence, and a geographical location strategic to big power politics isn’t perhaps the best ingredients for durable peace. But, therein lies the core of the refurbished pursuit of reconciliation: it cannot, and should not, produce ‘sudden peace’, but rather the kind of peace that is well stacked, thoroughly deliberated upon, and made by the people themselves.

When Myanmar began its ambitious peace process back in 2011 under the then President, Mr. Thein Sein, a new chapter in the country’s history began. It was as if someone had pushed the ‘resume’ button after sixty long years of total pause. Since then, the landmark process has only grown in size and scope and is today one of the most complex peacemaking projects in the world. The expansion began right after October 2015 when eight Ethnic Armed Organisations (EAOs) signed the Nationwide Ceasefire Accord (NCA), an instrument drawn up by the Sein administration. With the popularly-elected government of Suu Kyi and President Htin Kyaw taking charge six months later, national reconciliation became the sine qua non of democratic transition, thus giving fresh impetus to the whole peace process.

The Suu Kyi/Kyaw administration, since taking over, has erected a massive bureaucracy of political dialogue. At the top is the super management body, the Union Peace Dialogue Joint Committee (UPDJC) that is disaggregated into ‘Working Committees’ for different thematic focus areas. The UPDJC oversees the ‘Peace Commission’, the official negotiating body of the government. Another pivotal organ is the Joint Ceasefire Monitoring Committee (JCM), which is mandated with the responsibility to ensure ceasefires are not breached and complaints related to the same reach the government.

In terms of the dialogue structure, the entire process is bifurcated into two templates: union-level and regional talks. While the former is undertaken through the biannual Union Peace Conference (UPC), also known as the 21st Century Panglong Conference (21CPC), the latter takes place through a triad of NationalLevel Dialogues based on region, ethnicity, and topic. The inputs from these local dialogues are sent to the Working Committees, subsequent to which they are taken up for deliberations at the UPC. The unique feature about Myanmar’s post-2015 dialogue process is that it is heavily federal in nature, at least on paper. This is crucial because the ultimate objective of the process of national reconciliation is to achieve a federal union, a vision that emerged right after the country’s independence in 1947 but was truncated by one decade of intense civil strife and sixty more of repressive military rule. More importantly, the union-to-state level disaggregation of the dialogue process is absolutely imperative in a country like Myanmar where there is not one single thread of demography, but rather variegated pockets of ethnic constituencies that carry a strong sense of distinct identity and unique political ambitions for their respective communities. This becomes sharper in certain ethnic quarters that are represented by powerful and heavily-armed EAOs, like the Kachins, Shans, Palaungs, and Mons. Hence, considering local opinion within the process of national reconciliation becomes indispensable for any union-level peacemaker in Burma.

As the State Counsellor has stated bluntly, the road to peace is long and hard. The past one year has made it amply clear that national reconciliation is a goal that cannot be achieved through a top-down agenda. Neither can the government claim to have achieved peace through flash in the pan successes. It needs patience, understanding, and most importantly, non-coercive inducement through real political and economic incentives.

The fundamental problem in the dialogue process is structural i.e. the obligation for an EAO to sign the NCA in order to participate in talks with the government. Some EAOs prefer the other way: to participate in the talks first and then sign the NCA. This has led to the emergence of two distinct sets of negotiating parties: signatories and non-signatories. Several commentators in the past have pointed out that the eight EAOs who have signed the NCA are far less influential and powerful than the ones who haven’t signed it. The latter group includes large groups like the Kachin Independence Army (KIA), United Wa State Army (UWSA), Ta’ang National Liberation Army (TNLA), Myanmar National Democratic Alliance Army (MNDAA), and National Socialist Council of Nagaland-Khaplang (NSCN-K). Hence, unless the government manages to get the latter on board, peace will remain a distant dream.

But, while the dialogue process has been running fairly smooth with the signatories, Naypyidaw’s engagement with the nonsignatories has hit rough waters. Till about May 2017, the government had been negotiating with only one supra-group of non-signatories i.e. the United Nationalities Federal Council (UNFC). However, since early 2017, this 11-member collective of opposition EAOs began to show signs of internal fissure, especially after the November 2016 attacks in the border town of Muse (Shan State) by four EAOs – KIA, TNLA, MNDAA, AA – who identified themselves under a new umbrella body called ‘Northern Alliance (NA)’. Subsequently, in February 2017, the UWSA convened a meeting of eight non-signatory EAOs in the de facto Wa capital of Pangsangh and announced the adoption of a new path for reconciliation, away from the NCA. Three months later, certain members of the Pangsangh collectively decided to remove themselves from the UNFC and follow their own path to peace under the UWSA’s leadership. This has rendered the entire dialogue process much more convoluted and time-consuming.

Moreover, despite the mammoth bureaucracy of political dialogue, the government has been unable to implement the key provisions of NCA in entirety, which has ultimately led to delayed talks and unhappy stakeholders. While the government successfully held national-level dialogues in some regional quarters, it failed to organize them in two crucial states – Rakhine and Shan. The former is represented by the Arakan National Party (ANP) and the latter, in part, by the Restoration Council of Shan State/Shan State Army-South (RCSS/SSA-S), both of which have signed the NCA. This not just resulted in ANP and RCSS questioning the government’s intent, but also a critical three-month delay in hosting the second 21CPC. RCSS/ SSA-S, in addition, has confronted intermittent offensive maneuvers from the Tatmadaw (military) in the past one year, which has spurred a new trust gap between them and the union government.

Another critical lapse in the peace process has been the lack of effective mediators from the government’s side. Several EAOs have repeatedly complained about the dearth of individuals who could suitably communicate their sentiments and demands to both the civilian government and the Tatmadaw. This has led to a regressive communication gap between the core negotiating parties, leading to sporadic ceasefire violations, mismatched agendas, and most importantly, a widening of the trust deficit between key parties. This has also resulted in the intervention of third-party negotiators – like China – who thus have been able to throttle their own vested interests into the dialogue process and gain disproportionate political leverage.

Of all obstructions in the peace process, however, the most visible has been the continued armed conflict in the north between the NA members and the Tatmadaw. Intense and continued fighting has sharpened the trust deficit between Naypyidaw and the northern groups, which are extremely pivotal to any permanent peace arrangement that Myanmar might see in the near future. The violence has also had humanitarian repercussions, with thousands rendered displaced because of the Tatmadaw’s attritional counterinsurgency campaign that focuses on cutting off the economic channels and popular support bases of recalcitrant EAOs.

The military’s relentless offensives in the frontier areas have pushed the local population to question the motives of the union government and any ‘peace’ it might attempt to impose by force. The State Counsellor has tried to address this issue by engaging with community-level stakeholders in the frontier regions, like the Kachin Baptist Organisation (KBO), to regain the lost trust.

The Myanmar of today, is by no means, the Myanmar of the dark yesteryears. The new administration, in furtherance of the Sein government, has displayed the immense political will to move towards a permanent negotiated settlement to end the civil conflict for good. The NLD led Parliament’s prioritization of the peace agenda and Suu Kyi’s design to involve a wide range of political actors and stakeholders (including international entities) are the testimony to this. New platforms for dialogue have been created and new mechanisms of political engagement established. These are significant developments for a country that was miles away from national reconciliation just a decade back.

However, much work remains to be done. An elaborate bureaucracy will remain futile, and rather counterproductive, if not backed by capacity-building, institutional training of personnel, and real participatory engagement of all stakeholders. Truth is that every single individual, in her or his own capacity, is a stakeholder in the ongoing peace process. Sixty years of continuous unrest has decisively affected the lives of the entire population. Given the diversity in political imagination and the multiplicity of identities, the union government absolutely cannot afford to keep the talk process centralized.

It has to devolve to the ground, right down to the block-level so that no stakeholder is left out. For this, the government must make sure that the national-level dialogues happen on time and in fact, the state-level dialogue channels are diversified and disaggregated.

The government must also urgently commission specialized interlocutors who have a way with not just the various EAOs, but also the army. In this case, Naypyidaw would do well by recruiting respected individuals with experience of dealing with specific ethnic quarters, like the Kachins or the Mons or the Nagas. This could bridge the trust gap between the government and the frontier populations. More crucially, Naypyidaw must ensure that there is symmetry in the agenda for peace. A dialogue process cannot be accompanied by an offensive counterinsurgency design insofar as the non-state armed groups are not stirring trouble unilaterally. In a situation otherwise, the overall space for reconciliatory dialogue would remain restricted.

Thus, Myanmar still has a long way to go before it can reach any semblance of permanent, durable peace. Having said this, the last one year stands out as a bright ray of hope for the conflict-weary people of the country who now seek constructive development and equal participation in public life, all in a collective attempt to reverse more than half a century of political, economic, social, and cultural regression

Disclaimer: The views and opinions expressed in this article are those of the author and do not reflect the views of the editorial team of Myanmar Matters