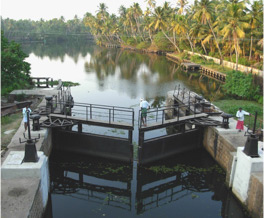 Union Minister of India Mr. Jitendra Singh has announced that central Government has decided to undertake 17 new waterway projects. Mr. Sing serves in the Indian Government as the Minister of State for Development of the North-eastern Region (DoNER). Indian Government has been paying special attention towards its North East region recently and it has a plan to focus on development of all the states located in the area. These projects are a part of that plan and they will serve to improve connectivity between North Eastern states and the rest of India. Projects for the betterment of railway, air and road links in all eight states located in the region have already been finalized and work has already begun for many of them.

All of these projects can be connected to Government’s Act East Policy which makes resolving connectivity problems in the North East a priority. Prime Minister of India Mr. Narendra Modi believes that India’s North East is it’s gateway to ASEAN countries and without improving connectivity in the region we cannot hope to increase trade with any of those nations. He also believes that nation cannot progress as a whole if some area is left undeveloped. The region has been generally ignored by the previous central Governments but fortunately things are changing for better now.

Emphasis on waterway projects is important because not only is this mode of transport cost effective and fuel efficient but along with that it is also environment friendly unlike other ways of traveling. At present, India has six waterway projects and some time back the parliament of the country has passed the National Waterways Bill, 2015 which seeks to add 106 inland waterways to the list. Out of the proposed 17 waterway projects to be undertaken in North East at least one and maybe even two of them will serve to connect the Bay of Bengal with the Brahmaputra River in Assam.